Together is better - Cranfield and The Open University team up

A Memorandum of Understanding (MoU) was signed this week between Cranfield University and The Open University to recognise future plans for cooperation between the two institutions.

The signing reflects the growing collaboration between the two world-class, highly influential educational organisations. The agreement covers co-operation across a wide set of activities, including supporting and enhancing local and regional economic development, providing opportunities for new education provision, joint research and equipment and asset sharing.

Professor Tim Blackman, Acting Vice-Chancellor of The Open University, said: “The OU and Cranfield are international leaders in part-time and postgraduate education respectively, but we’re also players in a growing regional economy and will work together to drive the innovation and productivity that are features of the South East Midland’s economic success.” 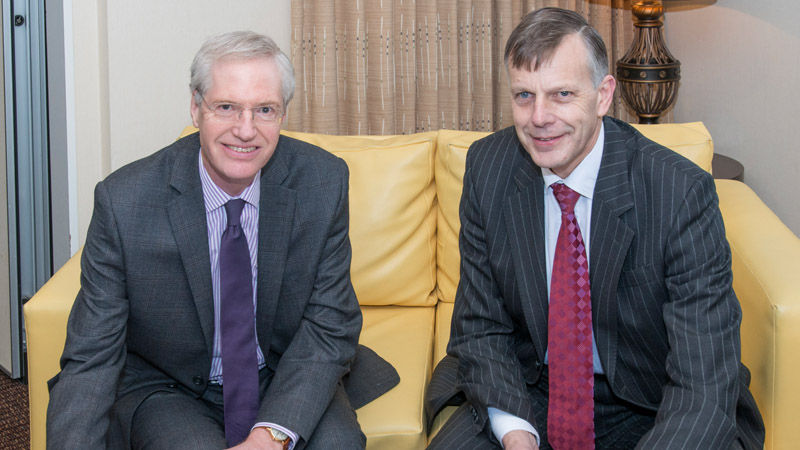 About The Open University

The Open University (OU) is the largest academic institution in the UK and a world leader in flexible distance learning. Since it began in 1969, the OU has taught more than 1.8 million students and has almost 200,000 current students, including more than 15,000 overseas.

The OU is rated in the top ten of UK universities for student satisfaction in the National Student Survey, since the survey began in 2005. In 2013/14 it had a 91% satisfaction rating.  Over 70% of students are in full-time or part-time employment, and four out of five FTSE 100 companies have sponsored staff to take OU courses.

In the latest assessment exercise for university research (Research Excellence Framework), nearly three quarters (72%) of The Open University’s research was assessed as 4 or 3 star – the highest ratings available – and awarded to research that is world-leading or internationally excellent.  The Open University is unique among UK universities having both an access mission and demonstrating research excellence.

The OU has a 41 year partnership with the BBC and has moved from late-night lectures in the 1970s to co-producing prime-time series such as Frozen Planet, Bang Goes the Theory, Britain’s Great War, I Bought a Rainforest and Business Boomers. Regarded as Britain’s major e-learning institution, the OU is a world leader in developing technology to increase access to education on a global scale. Its vast ‘open content portfolio’ includes free study units on OpenLearn, which received 5.2million unique visitors in 2012/13, and materials on iTunes U, which has recorded more than 66 million downloads.