Michael Papé: The Joys and Challenges of Growing a Family Business

When Michael Papé started school he talked enthusiastically to his teachers and classmates about the zoo in his back garden. He described the exotic creatures such as penguins and sea lions that swam in aquariums, and his teachers congratulated his parents on their child’s powers of imagination. He might well have a vivid imagination was their response, but the back garden was indeed full of pens and fish tanks housing creatures from all over the world. Their home was a staging post for the animals that Ravensden founders Barry and Susan Papé supplied to zoos and aquariums in the UK and mainland Europe.

On Wednesday 28th November, Mike, as he likes to be known, held a Cranfield audience enthralled with an account of his family’s business journey over nearly 50 years. If you’ve visited a well-known zoo, safari park or aquarium and bought a toy animal as a gift or souvenir, it’s highly likely you have a Ravensden product in your home. And if you own a toy meerkat, you definitely have: to date Ravensden has supplied, comparethemarket.com, with some 300,000 Alexanders, Sergeis and the rest of the cast of characters. Look closely and you will see that they resemble their on-screen counterparts down to the tiniest detail.

The transition from live to toy animals was just the first in a series of transformational steps that Mike highlighted. The original business model had a limited future, once the company’s customers had established their own breeding programmes, and so Barry and Susan created a new revenue stream for their market. Their expertise in cross-border sourcing and import-export proved highly transferable, the major challenge being to identify a new supplier base. Other big developments outlined by Mike include the company’s first investment in a computer in 1982, a change to plc* status, the ability to trade in multiple currencies, an online customer portal for 24/7 ordering and, most recently, a rebranding. This was more than just a new logo, but a complete review and overhaul of Ravensden’s corporate identity. All communications media now feature the strapline “A world of animal companions”, as a key element of its differentiation in a competitive marketplace. A big multinational might regard these changes as routine, but for a business that still turns over less than £10 mn, each such step has a major impact.

After university Mike’s original plan was to join the British Army, but he was offered the opportunity to serve in the Territorial Army [the UK’s national military reserve], meaning he could combine serving his country with joining the family business. There was no active pressure from his parents to join Ravensden – he was just drawn into it, but today could not imagine working for anyone else. His primary role as a director is to manage the supply chain of Far East manufacturers. It’s a challenging job. Currently the company offers customers a choice of about 1,400 product lines, with 200 – 250 new additions annually. Some will be discontinued, but managing a product range of this size would be a tough task for a business ten times the size of Ravensden. Mike also makes time to spend with key customers, to keep his finger on the pulse of the market and to ensure he provides his suppliers with the most comprehensive specifications he can. The company’s continuing success, he believes, depends crucially on the lifelike quality of the products. “We know what animals look like,” he says. Some, such as their giraffes, retail for as much as £20. Purchasers expect a high-quality product that will last, and Ravensden has never compromised: the business invests heavily in design, makes a healthy profit and would rather turn away business than trim its margins.

Throughout the evening Mike returned to two themes. The first was the importance of close relationships, with suppliers, customers and staff. The family’s name is not actually above the door, but they act as though it were. Over the years Mike and his father have whittled their supplier base down to a trusted core, most of which are themselves family-owned and managed, and Mike understands the detail of every stage of the production process. Suppliers must also meet high ethical standards and be able to demonstrate these. In Mike’s experience an ethical supplier is also much more likely to be a good and reliable business, so there’s a win on both fronts. He is keenly aware of what he calls the risk, as a family business, of disappearing down your own rabbit-hole; that is not paying enough attention to the wider world. Both he and his brother Richard, also a director, prepared themselves for future challenges by attending programmes 20 miles away at Cranfield, Mike taking an MBA and Richard the Business Growth Programme. He – Mike – has also served as chairman of two industry associations.

The second theme was values. When Mike interviews a prospective employee, he spends most of the time talking about the company’s values and ethos. These are not an optional extra: if, for example, Ravensden says it will deliver on time, in full and to spec, the commitment is total.

And that brings us finally to the future. For the last two years Brexit has been hanging over the company. Forty per cent of its customer base is in mainland Europe, and the directors have a European shell company ready to go at the press of a button if it all turns out badly. Despite all the contingency planning it’s still an anxious time. Another issue still to be resolved is the delicate matter of succession planning. His parents are in their seventies and still deeply involved in the company. They’re not yet ready to hand over their baby to the next generation, however professional and able, so there’s no plan as yet. What of the latest generation of Papés? Fortunately, perhaps, they are still too young for this to be an issue.

In the meantime Mike regards himself as a guardian/trustee. Will Ravensden complete its 50 years as a family-managed and controlled business? There’s little doubt. As for the 50 years after that, once you’ve heard Mike’s total passion you wouldn’t bet against it!

*plc standing for public limited company, although the shares in this case are still wholly-owned by the family. The costs of compliance are higher, but many customers prefer to trade with a plc than a limited company.

Mike’s presentation was the last in the 2018 series of Wednesday Business Enterprise Talks at Cranfield University, hosted by the Bettany Centre for Entrepreneurship. Up to 50% of participants on Cranfield Master’s programmes are from a family business background. 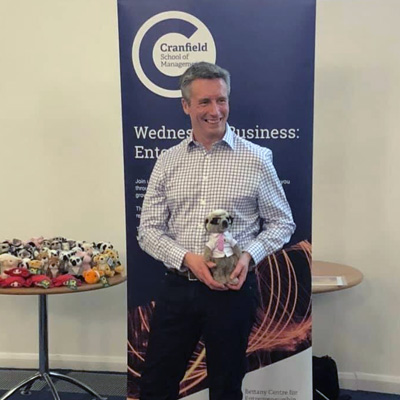