Frank Noppel: Reaching for the Sky!

On Thursday 18th February we were privileged to have a glimpse into the future, provided by Frank Noppel, the second contributor to our 2021 entrepreneur speaker series. Frank is the CEO and founder of Flugauto, a business designing and manufacturing unmanned aerial robots to deliver cargo to remote locations. Drone technology may be well established by now, but Frank’s vision is to take the concept of flying robots to a completely new level.

By profession Frank is an engineer, and his passion is for aviation. Attracted by Cranfield’s reputation in aerospace, his PhD at the Rolls Royce University Technology Centre focused on sustainability in flight technology at a time when this topic was barely on the radar. Although he was subsequently drawn back into corporate life, working for five years as a consultant for one of the world’s leading consulting firms, the lure of entrepreneurship eventually proved too strong. To a packed virtual audience, he told the story of what has driven him to found a business that is set to fundamentally transform the logistics industry.

Though immersed in engineering, Frank was bitten by the entrepreneurship bug while at Cranfield. He took part in events organised by the Bettany Centre and built a solid understanding of what it takes to launch and grow a new venture. When it came to starting his own firm, he returned to his love of flying and built on what he had discovered in his research. For someone from a technical background, two factors which are vital might not seem so obvious: the importance of a strong founding team, and an understanding of fundraising. For Frank it was very much a case of surrounding himself with people who have complementary skills and understanding, either as advisers and useful connections, or as partners in the business journey. He also emphasised the need for an aspiring entrepreneur to understand the full range of financing options available: not simply to seek equity but to be clear about what kind of capital is required, and examine whether it is possible to postpone an injection of external funding by bootstrapping the business. A very early-stage venture is selling a vision, and funding is expensive. A more mature business has a stronger story to tell, and is better able to negotiate more sustainable terms for the specific requirements where the capital is applied.

Frank also dwelt on the opportunity which Flugauto is addressing. The Logistics industry is vast, worth many hundreds of billions of dollars a year. It is driven by the imperative of price, speed and reliability and is at the centre of a convergence of innovation and new technologies. Customers want their deliveries to be faster, cheaper and greener and the Flugauto proposition is to provide point-to-point airborne delivery for the price of road haulage, solving the problems of growing urban congestion and delivery to remote locations.

You will not see Frank’s futuristic unmanned drones in large numbers any time soon. He and his Michigan-based team have painstakingly proven the concept, to produce a reliable prototype that will meet both the needs of customers and the stipulations of air-space regulators. Early adopters of Flugauto technology are likely to be businesses where time is essential, such as the energy sector, or medical urgencies in places that are hard to reach. He estimates that Flugauto will be coming to market within twelve to twenty-four months, and we wish him every success in, quite literally, his business launch!

Learn more about how Flugauto is disrupting the Logistics industry. 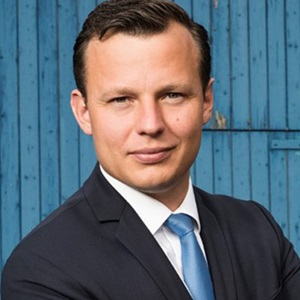