Within the small-scale laboratory, new formulations are taken from the conceptual stage through to a 10g mix. Compatibility, including thermal and impact, of all components is performed. Analysis of the formulation is performed in conjunction with the Characterisation and Ageing Group using differential scanning calorimetry (DSC), thermal gravimetric analysis (TGA), FT-IR, gel permeation chromatography (GPC) vacuum stability, and in-house small-scale hazard tests with the Testing and Evaluation Group.

The formulations facility is a remote processing plant for the production of up to 500g of explosive composition. Process operations are monitored from an isolated control room via CCTV. The operations of mixing and pressing of explosives can be carried out in the facility. Mixing is carried out using an IKA vertical planetary high shear mixer with vacuum and heating available. The facility is fitted with a conducting floor and the equipment within complies with IP65 and Ex rating (Cat II). The press facility currently contains a double acting 10-ton press housed within an H-frame and a separate 100-ton, double-acting, long-stroke press.

The processing studies are being carried out to develop explosive compositions with reduced vulnerability but maintain the performance levels. These are PBX compositions, explosives combined with polymer binder systems to control the hazard but still ensuring the performance is not compromised. The facility also has a Z-blade mixer, an anchor stirrer mixer and an acoustic mixer.

The development of these compositions requires a varied testing and assessment programme to obtain the required properties of the explosive which is readily available within the Centre for Defence Chemistry. 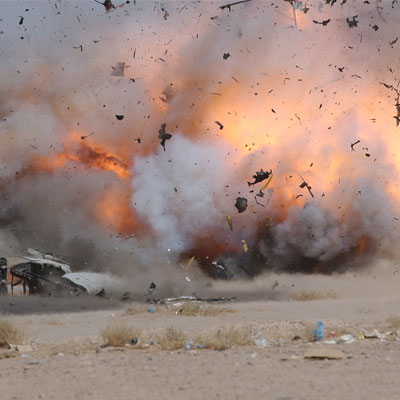 Focussing on chemical sciences in defence