There’s no putting on the brakes: Why businesses must learn to harness the power of change

Businesses of the future will have to deal with constant change, moving resources to exploit ever-shifting opportunities - there’s no putting on the brakes.

The question is how? Change has to stop being seen as the problem, the disruption to business performance, and become the power behind what makes it roll.

Talking to senior managers, the biggest challenges of recent years have all been around dealing with rising levels of complexity in terms of the introduction of new technologies, new and different markets, and the uncertainty and volatility it brings to planning. It’s led to an inability to even start to predict the details of a mid to long-term future. While forecasting activity still remains an important tool for organisations in some areas, the speed at which the rate of change is increasing means businesses are unable to make the best use of their resources. It doesn’t matter - because we’ve reached the stage where it’s more useful for business leaders to accept the unpredictability they face, and to instead focus on what will make their organisations more adaptable and responsive to whatever comes.

Formula 1 racing teams are living examples of how this kind of highly adaptable, high-performance operation can work. A sports team, at first glance, may look to be another world. But F1 teams, like all organisations, have to make the best possible use of funds, people and technology to deliver performance. A $3 billion industry, F1 is ultra-competitive, financial stakes are high, and the effort from leaders and their teams needs to be intense and unrelenting.

My interest in motor racing began at Massey Ferguson, best known as the world-leading tractor brand but which, yes, used to have its own Ferguson F1 racing car in the early 1960s. I’ve since had the chance to access the inner sanctum of F1, observe its systems and processes, and meet key staff and drivers, including the long-time architect of the sport, Bernie Ecclestone. Getting to know F1 operations and management has provided an important way to bring the idea of resource-based strategy to life: the idea that each business has a unique set of resources, and the role for managers is to ensure that uniqueness is applied for best effect. In F1 the mechanics of the links between individual actions, team outputs, organisational characteristics and performance are opened up for scrutiny.

With a sport like motor racing, it’s obvious when one team is outperforming the others. In our research, we’ve been able to identify the factors that have led to that winning performance, summarised in terms of a ‘performance pyramid’ (see below). The real focus of the F1 approach is the middle section of the pyramid, ‘constant learning’. The peak is the ‘focus’ of teams, what they’re trying to achieve, the sense of purpose and direction. Finally, the base is the ‘winning culture’, what provides the motivation and ability of all staff to keep up with the learning, and not to ever sit back. 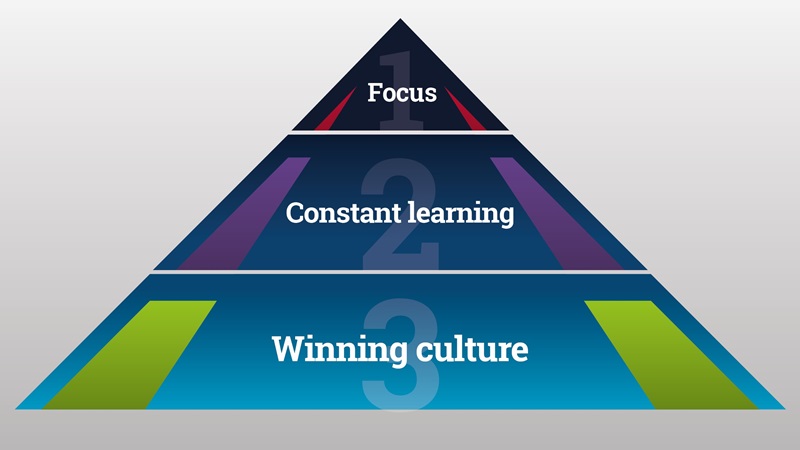 What matters is the ability to learn, to be able to simultaneously innovate and imitate. F1 teams are very happy to copy what they’ve seen work for others – there’s no time for fussy pride. It’s also an issue of the speed of learning: how well teams are able to respond and find solutions to new problems, to react to what competitors are doing and to the new regulations of the sport as they’re introduced. The essential practice is the ritual of debriefs. Every opportunity is taken to review performance as they go along.

During a Grand Prix weekend there will be five debriefs: three during practice sessions with the car, one after the qualification races and finally after the race itself. These will look at every aspect of what impacts on the performance of the cars and what makes them go faster – the driver, the technology, the pit stops, the tyres – in order to understand what happened. Initial debriefs can be as short as 10 minutes, but after the race will be two hours or more, involving 50 to 60 people at the track as well as staff back at the F1 team’s HQ. Mercedes-AMG Petronas, for example, will include 30 to 40 people on headsets at HQ looking at all the data gathered, what worked and the problems. In each race it is estimated there is going to be an improvement of around one-tenth of a second, so before the next race a team knows it’s going to need to find ways to improve performance by more than that to secure a win. That one-tenth could be found anywhere across the operation, not just in the car’s technology. One team, for example, transformed its canteens so that healthy foods were available for people working long hours.

Business organisations, typically, are not good at holding reviews - not even annual performance reviews, which are often seen by managers as a chore, a formality. Larger performance reviews of teams and the organisation as a whole in relation to strategy only happen when something goes wrong. With this approach, the review becomes more about blame, a process carried out to establish and allocate blame rather than to focus energies on getting to the details of what can improve. Cranfield has put the principle into practice by working with businesses on ‘pitstop simulations’ with teams, using regular reviews that have led to measurable improvements in productivity. What we see is that teams start to think more about performance improvements, the grit and detail of what needs to change, just because they know a review is coming. This doesn’t have to involve large-scale resources and bureaucracy, but a mindset of constant learning and the knowledge that the learning is for a tangible purpose.

There are other lessons here for businesses in the use of data. Organisations of all kinds are getting access to vast amounts of data - financial, marketing, people analytics - but what F1 teams manage to do is to pinpoint when data means something in terms of actual performance now and next week, what needs to be scrutinised in relation to strategic purpose.

Successful F1 teams talk in terms of the importance of having a ‘no blame’ philosophy. It’s accepted that the intensity of the sport and fast-turnaround cycles during the season create a pressure cooker environment. There’s nowhere to hide or take a break. Leaders are acutely aware of the need to get the balance right - to maintain the relentless focus on addressing anything that negatively affects performance, without resorting to attaching problems to particular people or groups. This relates to the concept of ‘psychological safety’, coined at Harvard Business School. F1 teams work on creating a culture where all staff are encouraged to feel safe when talking about performance, that they can be wholly honest without statements being assumed to be a personal challenge or threat. Most business leaders will be more familiar with a culture where employees feel the need to protect themselves first, to be cautious when talking about others, leading to a range of dysfunctions, a lack of understanding and for the organisation to lose sight of real issues that need to be addressed. F1 leaders appreciate that high-performance is not a form of hardware, it works as a result of how people work with each other, their use of soft skills, emotional intelligence, and in building commitment and being able to make the whole more valuable than the parts.

To galvanise an organisation into constant learning takes a strong and clear direction: what are we learning for? The shared focus on what the organisation is doing and why creates the necessary confidence and commitment. But at the same time this means having flexibility, not setting out a rigid strategy and then being its guardian. F1 leaders benefit from also being part of the ‘debrief and review’ culture, willing to change and adapt strategy when needed.

F1 is also a useful model for businesses in its attitude to the big picture, the evolution of an entire industry. The teams work together as a sector, demonstrating there are benefits to be had from co-operation by competitors. New regulations from 2021 are being brought in to help redress the balance between large and small teams in order to make the sport viable for all. Without the smaller teams and emerging players, everyone in the industry begins to suffer. F1 is also always conscious of the customer experience, in this case among the fans of the sport. New technical innovations around car aerodynamics might improve speeds, but haven’t stuck because they also reduce the ability of drivers to overtake, and reduce the excitement. The sport as a whole knows it will need to change radically in the coming years to attract new generations of fans, taking advantage of the fragmentation of media and customer behaviours, not only generating revenue through TV rights and race days. Direct engagement with F1 via augmented reality is coming - audiences for the electric Formula E races are already able to ‘fan boost’ their favourite cars with extra energy - and this is just the beginning. The business opportunity is in global F1 races where fans are able to join in and race against other fans as well as the top drivers, mixing the real with the virtual. And there’s the lesson for other organisations: as long as it keeps its ability to live by change, F1 will keep being re-invented. 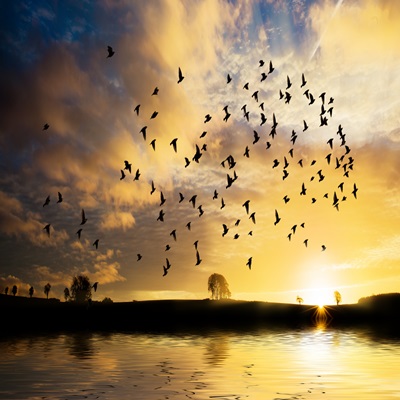 Strategy The Strategy Group focuses on the development of strategic capabilities in individuals, groups and organisations