Openings (cavities) in the aerodynamic surfaces of vehicles can create noise and vibrations. Techniques are explored to control or delay the onset of such events. Read more Read less

This research has generated data that have been included in design guidelines used in industry, and influenced design practices. Ensuring the safe carriage and release of new stores on military aircraft is an expensive process, typically involving many hours of flight tests and release trials. Our results have helped to increase the reliability of, and confidence in, computational tools that are increasingly used to reduce the extent of such flight trials. Our research on reducing or eliminating undesirable pressure fluctuations arising in some cavities has revealed promising techniques to lessen the noise produced by the vehicle, avoid structural damage, and allow safer release of stores from military aircraft.

There are two aerodynamic problems associated with releasing stores from internal bays on aircraft. One is ensuring that the stores separate safely, without striking the aircraft. Assuring this typically involves expensive flight trials for each store/aircraft combination. The other problem is that high-speed flows over cavities (i.e. cut-outs or bays in a vehicle’s surface) can lead to extremely high pressure fluctuations that cause intense noise and structural damage (to aircraft and store). This research sought to address the first problem by increasing the understanding of the cavity flow environment and thereby improving safe release. The second problem was addressed via flow control techniques.

The researchers of Cranfield University’s Aero-mechanical Systems Group have more than 15 years of experience in aero-acoustic measurements and corresponding data analysis, and specific expertise in the physics and control of cavity-flow resonance. Their past and current studies include the formulation and validation of cavity-flow models and the development of passive and active techniques for reducing the pressure fluctuations induced by cavity flows.

The transonic wind tunnel at Shrivenham has been used as it is a suitable facility for researching cavity flow resonance at high speed. Other wind tunnels are used for testing larger models at lower speeds. A range of diagnostic equipment including dynamic pressure transducers, hot-wire, pitot-probe and laser-Doppler anemometers, particle image velocimetry and other types of flow visualization, are used for capturing the flow and acoustic characteristics relevant to this type of study. The Cranfield supercomputer cluster has been used for the computational work. 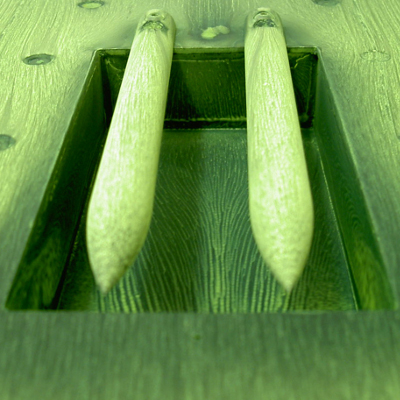