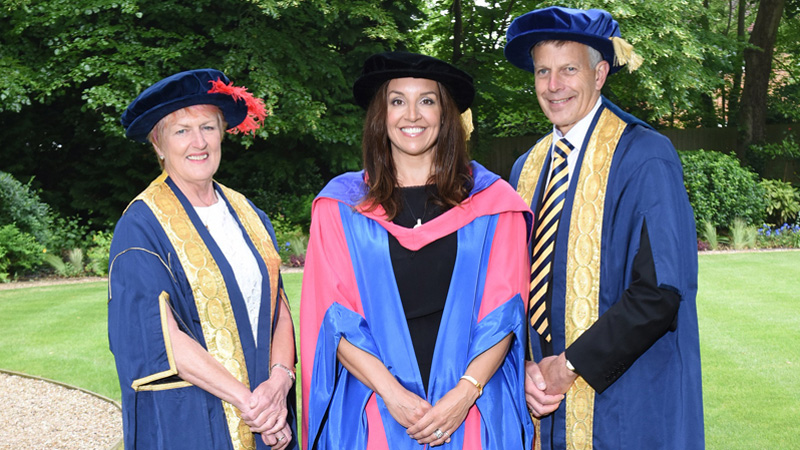 Sarah Willingham, entrepreneur, investor and consumer expert received an honorary degree from Cranfield University today (28 June) in recognition of her outstanding contribution to business and entrepreneurship.

Starting her career in the restaurant industry and working with some of the UK’s biggest known high street names including Pizza Express and Planet Hollywood, Sarah has gone on to build up a multi-million pound business empire.

She completed her MBA at Cranfield in 2003, and has since received a number of accolades for her contribution to business, including being named one of The Sunday Times’ ‘500 Most Influential people in Britain’ in 2016.

Sarah, who attended the ceremony with her four children, and husband Michael who she met at Cranfield, said: “‭I loved my time at Cranfield studying for my MBA, it ‭has always been a special place for me and I’m deeply ‭honoured to be receiving this award.” ‬‬‬‬‬‬‬‬‬

Her first major success as a business investor was The Bombay Bicycle Club, which she turned into largest and most successful Indian restaurant chain in the UK.
Between 2006 and 2008, Sarah appeared alongside Raymond Blanc as a judge and investor on the popular television series The Restaurant. In 2015, she was asked to join BBC2’s Dragons’ Den and, during two series, invested in six enterprises.

Speaking of supporting start-ups through to established and growing brands, Sarah said: “I don’t consider myself a traditional entrepreneur. For me, it’s about spotting the talent and the magic and scaling it up. You have to have a good business plan but also have to justify why it’s you, not the person next to you, who should get the investment.”

Professor Lynette Ryals, Pro-Vice-Chancellor and Director of the Cranfield School of Management, presented the award to Sarah during the graduation ceremony. She said: “Welcoming Sarah back to Cranfield and awarding her with an honorary degree is a real privilege and demonstrates the strength of our alumni network. Sarah is an inspirational figure, who makes her success sound easy but in reality it comes through extraordinary talent plus incredible hard work.”

“We have continued to work closely with Sarah since she completed her MBA, and admire her passion and savvy approach to the world of business. Having Sarah as a member of our advisory board has meant her expertise is being passed down to future generations of budding entrepreneurs.”