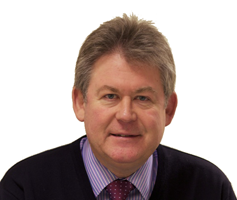 In the last 35 years, Jerry has successfully started and grown four companies.
In the mid-eighties, Jerry’s inspiration was to concentrate on the telecommunications market he thought was about to boom. This led him to form Telecom Design Ltd. in 1987 with an investment of £1000. TDL was a design consultancy specialising in PTT approvals for the deregulated telecommunications market. The TDL shareholder value was realised through a trade sale in 1999.

In 1992, alongside TDL, a technical Electronic Component Distributor was started, TDC Ltd. Following impressive growth, turnover increased from £330,000 in 1993 to £6.6m in 1998 and TDC was officially recognised as the 86th fastest growing UK company in the Sunday Times Virgin Atlantic Fast Track 100.

In 2001, Jerry went back to school, attending the Cranfield Business Growth Programme and subsequently the Cranfield Value Forum. This work resulted in many changes within TDC during one of the toughest downturns in the UK electronics industry. TDC became recognised as the market leader in embedded wired and wireless component distribution and was acquired by the Abacus Group in 2004.

Abacus employed 1350 people and becoming part of the group secured the future of TDC by providing the customer reach, geographical scale and the financial resource of a £200M business overnight, not to mention a potential sales team of 165 people.

As a Corporate Executive, Jerry was responsible for the group’s Wireless business strategy. This entailed replicating the TDC business model throughout Europe, resulting in successful Wireless businesses in Norway, Denmark, Sweden, Italy, and Germany.

Although Jerry is an engineer at heart, his driving passion is for sales and in 2007 Jerry left the corporate world to start a sales management consultancy called Sales Skill Ltd. Sales Skill helps owner managers to build, manage and motivate their sales teams. In this role Jerry can draw on his experience and mentor owner managers to achieve their own goals for themselves and their businesses through growing their sales profitably.

Jerry has delivered the Cranfield Sales Masterclass since 2003 and has been a regular lecturer on the Cranfield Business Growth Programme for 10 years. Jerry is a BGP Counsellor and runs a BGP Club based in London and the Home Counties.