Some of the UK’s biggest businesses have united to launch a supporters group for the creation of a new STEM-focused university in Milton Keynes. MK:U, planned to be a new-model university aligned to business needs, is set to help them address the digital revolution taking place in their global industries.

The businesses, which include Network Rail, Santander, Capita, Aston Martin, PWC and Grant Thornton, employ over 200,000 people in the UK. They want to see MK:U develop graduates with much-needed skills in cyber security, AI, and data science.

The coalition of businesses, referred to as the MK:U Business Supporters Group, officially launched today at an event at Cranfield University’s Aerospace Integration Research Centre. As well as getting involved in course design and student placements, the supporters group will lobby government to help create this important national asset and deliver a much-needed new talent pipeline. The proposal for MK:U is backed by Cranfield University and Milton Keynes Council and will be accessible by well over 10 million people within an hour’s travel of the proposed university.

Speaking at the event, Professor Lynette Ryals OBE, Chief Executive of MK:U said, “The launch of the Business Supporters Group is a big moment for MK:U. It shows how urgently UK businesses of all sizes want a new university that’s focused on bridging the gap between what students are currently taught and the skills businesses need employees to have in the real world. With the backing of some of the UK’s biggest businesses, MK:U can deliver thousands of new graduates in sectors like AI, robotics and digital where Britain must compete in the future.”

John Cope, Head of Education and Skills at CBI, one of the members of the Business Supporters Group said, “Employers across the UK need more STEM graduates who know how to apply their knowledge in practical ways. This is why the CBI supports MK:U, a new style university in Milton Keynes.

“Our report ‘Delivering Skills for the New Economy’ highlighted the UK economy is losing out on £63bn a year as companies struggle to find people with digital skills. MK:U will be a vital part of the solution for the UK’s increasingly digital economy.”

Dave Dunckley, CEO of Grant Thornton UK LLP, said ahead of the event: “New technologies are forever changing the business landscape, creating new opportunities and redefining old ways of thinking and working. The battle for talent with the skills to develop, apply and utilise new technologies has never been stronger. We see this firsthand, within our own operations, but also across our client base and throughout the economy. We are therefore fully supportive of the MK:U project and believe the new style university will go some way in helping ensure UK businesses have access to the skills of the future to enable our economy to maintain its global competitiveness.”

In a statement, the 33 businesses behind the MK:U Business Supporters Group said: “Together we employ more than 200,000 people, many of whom come from a STEM background. These people are vital to the success of our companies, and our need for STEM trained graduates will continue to grow in the future.

All our industries are in the process of being revolutionised by digital technology, and we want to be on the forefront of this change. It is of ever-increasing importance to us to have staff with skills in areas like data science, cyber security, and artificial intelligence.

We are supporting the creation of MK:U. It will be a national asset with a focus on employability and 21st century skills, producing graduates who are ready to make a contribution in the workplace right from the first day.”

Members of the Business Supporters Group range from Milton Keynes based Appii, who employ five developers on their employee background checking app, through to Capita who employ nearly 50,000 people in the UK delivering technology-based business services to the UK government and multinationals.

MK:U is designed to meet urgent technological and skills gaps that exist in the UK economy. The vision for the new, groundbreaking university is one that is hands-on, focused on a curriculum for the digital economy, and specifically addressing the employment needs of organisations in the 21st century. Many of the courses at the new university will be accelerated degrees taken over two years rather than three, and MK:U will also offer a range of degree apprenticeships in technology-related fields. Several courses are also being co-designed alongside employers including Santander, who have their UK head office in Milton Keynes. 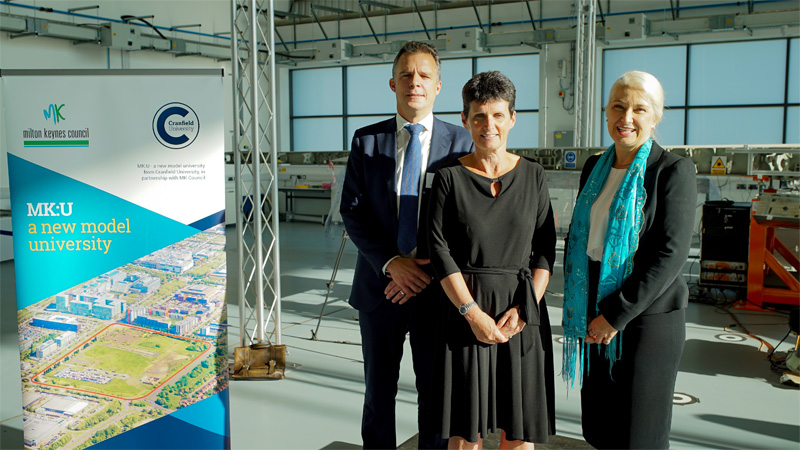 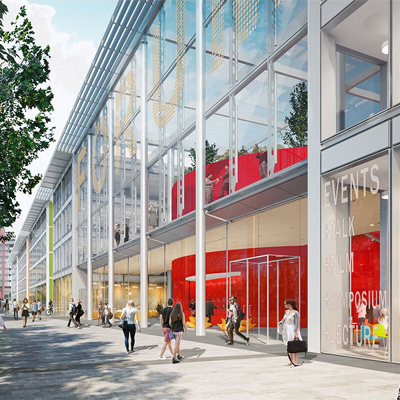 Hopkins Architects, the designers behind Harvard University’s new Smith Campus Center, as well as the London 2012 Velodrome and the award-winning WWF Living Planet Centre eco-building, have been chosen to create a 21st century university quarter for Milton Keynes 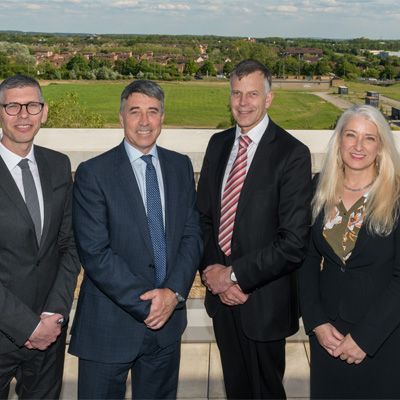 Santander has today announced it is backing MK:U, providing £30 million of funding to help establish the university