Laser ablation inductively-coupled plasma mass spectrometry (LA-ICP-MS) is a high-precision technique providing quantitative analysis for most elements, from Li to U, with minimum sample destruction. Most solid inorganic materials are suitable for analysis by LA-ICP-MS, including glass, ceramics, bone, minerals and metal. Commercial analysis of similar and related material types can be undertaken. Analysis of other materials may be available on request. Read more Read less

Detection limits are routinely ppb or ppt for transition metals and REE, but can be variable depending on the element and, in some cases, the other elements present. Detection limits of some elements, such as iron, may be reduced due to isobaric interference. A few elements (e.g. C, N, O) cannot be analysed by LA-ICP-MS. Quantification precision and accuracy is typically better than 10% for most elements. Solution analysis is also available.

How the LA-ICP-MS works

A laser beam is focused on and fired at the sample surface, ablating a small pit (around 5μm deep and up to 110μm in diameter). The ablated material is carried in a stream of helium gas into the argon stream of the plasma in the ICP torch. The sample is instantly ionised and passes though a series of cones and lenses (known as the interface), and into the mass spectrometer.

The X-series 2 employs a quadrupole mass spectrometer consisting of four charged bars which rapidly separate the ions by mass and sort them by mass to charge ratio (m/z) before passing through to the detector. The ions generate a pulse when hitting the surface of the detector and by measuring that pulse the system gives results in terms of counts for each atomic mass unit.

Data is calibrated relative to that measured from a set of standards and blanks. For fully quantitative results, either all likely elements must be analysed and normalised to 100%, or the concentration of an internal standard (usually a major element, e.g. Ca or Si) is required, determined by another technique such as electron probe micro-analysis.

The Cranfield Forensic Institute lab runs a Thermo Scientific X-Series 2 ICP-MS coupled to an ESI New Wave NWR 213 laser ablation system. Samples must be dry for laser ablation and can be analysed in several different forms:

Analysis of samples in solution is also possible. 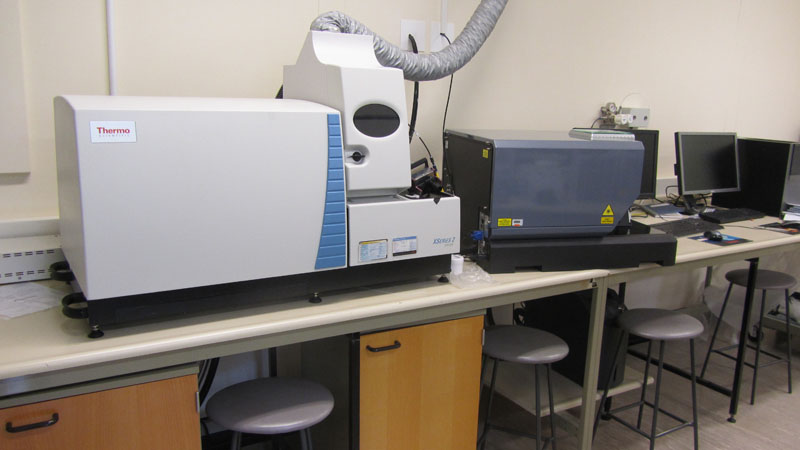 Most solid inorganic materials are suitable for analysis by LA-ICP-MS, including: