We researched the airborne monitoring, through the use of multiple unmanned aerial vehicles (MUAVs), of traffic on the ground, for example cars. This is to detect and assess hidden or disguised threats and has both civilian and military applications.

We focused on airborne monitoring through the use of multiple unmanned aerial vehicles (MUAVs) of the behaviour of traffic on the ground, such as cars, to enable the detection of hidden or disguised threats. A human ‘commander’ could then be notified about the potentially dangerous vehicle(s).

This could be used for capturing traffic violations on motorways in a civilian context, or alternatively for a military application in other parts of the world to detect and assess the (erratic) behaviour of vehicles in areas of conflict.

Recently, autonomous airborne surveillance and reconnaissance systems have become a challenging and emerging problem in the area of aerospace and robotics with the rapid improvement of UAV (unmanned aerial vehicle) operation and sensing technology. Airborne monitoring allows suspicious or unusual behaviour to be identified and investigated promptly so that situational awareness can be increased in support of border patrol, law enforcement and protecting infrastructure.

For this, many researchers have investigated a swarm of autonomous airborne sensor platforms having a long endurance, as well as good spatial coverage with an appropriate level of decision-making. In particular, surveillance by UAVs equipped with a MTIR (Moving Target Indicator Radar) sensor can provide a certain level of accurate estimation of a large number of moving targets, as well as the capability to respond to possible threats from the air.

However, for detection of suspicious behaviour, the operators have to manually analyse the gathered mass data and construct a coherent picture of events. With this in mind, the research study focused on the development of a high-level analysis algorithm to process target information acquired by UAVs which provide awareness of abnormal behaviour.

Our expertise in guidance, control, navigation and multi-vehicles systems ensured we secured the funding under the Competition of Ideas (COI) programme.

The swarm also decided collective and individual actions using different pieces of information and knowing what information was necessary, recommended or just desirable. The decision-making model used by the sensor swarm enabled it to isolate useful, from extraneous, information and placed this in a context where it could have predictive value. 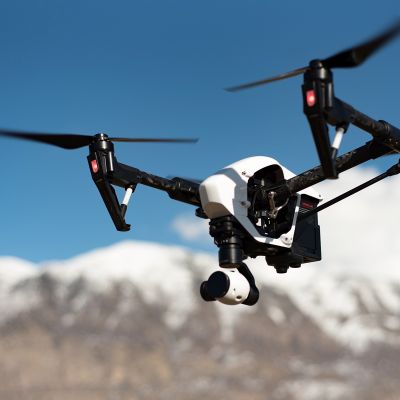