The ability to detect and quantify methane concentrations has importance in both environmental and process safety contexts. For example, the ability to detect natural gas leaks on offshore platforms is a vital part of explosion prevention schemes. A methane cloud larger than 5m in diameter is large enough to cause damage if ignited and, consequently, detectors may need to be placed on a grid with spacing no greater than 5m, leading to deployment of large numbers of sensors. In order to operate in explosion prevention regimes, the sensors must detect methane gas below the lower explosion limit so that operators can take action before an explosive mix of air and methane is created by any potential leak. For example, a common action point is at 20% of the lower explosion limit (LEL) and therefore a sensor needs to be able to reliably detect methane concentrations of this magnitude. As the LEL of methane is 4.9% by volume, a sensor needs to be able to detect and quantify methane concentrations of 1% by volume or 10,000ppm, with a precision of around 500ppm.

Typically on an oil platform, or petrochemical plant, large numbers of sensors will be placed at different locations, which is expensive due to the cost of the sensors themselves and the need for installation and maintenance within explosion hazard zones. As well as methane, sensors are needed that respond to leaks of other potentially hazardous gases such as hydrogen sulphide and oxygen (in areas where asphyxiants are used). Pellistor sensors are typically used to detect potentially explosive gases, but these require regular calibration because of known effects of drift and poisoning. Electrochemical sensors are well established for potentially toxic gases and oxygen, but have a limited lifetime.

For these reasons, interest has been growing in detection technology based on tunable diode laser spectroscopy (TDLS), with its high sensitivity, calibration stability and specificity to particular gases with no cross-response (for example, to humidity). However, the cost of this technology is prohibitive when each detection point requires its own tunable laser. One solution to the problem has been to share the light from a single laser across multiple sensor points connected via optical fibre. However, this solution requires a complicated network of optical fibre, with an output and return fibre needed for every detection location, thus 2n individual fibres connect to n separate detection points as well as an individual photo detector and associated digital acquisition channel for each sensor. Our work has been to multiplex several sensor locations along a single optical fibre, using a single laser diode and photo detector, thereby significantly simplifying both the installation and interrogation unit and providing a lower cost per sensor location, such that the technology becomes competitive with traditional point sensors.

Cranfield University has developed a method to enable simultaneous measurements of gas concentrations at multiple points, using an optical fibre, with a single fibre-coupled laser and photodetector, by combining tunable diode laser spectroscopy (TDLS) and range resolved interferometry (RRI). Closely spaced gas detection cells can be deployed along the length of the fibre and can be positioned to follow an individual gas pipe or to provide multi-point gas sensing adjacent to an individual process or other hazardous location. Detection locations can be as close as 1m apart along the fibre, or can be spaced further apart, limited by the coherence length of the laser (lasers with long coherence lengths of up to 2km are commercially available). In principle, we believe our solution can be implemented as connectorised sections, enabling different configurations with a modular product. Improved sensitivity and coverage of gas detection are enabled. 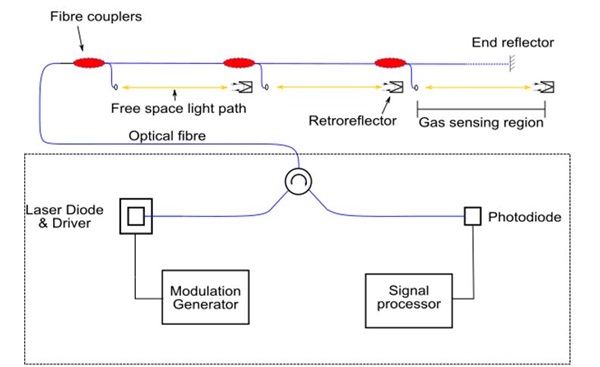 The principle of operation of TDLS permits the gas detection through measurement of the optical absorption of gas at multiple sampling points, while the wavelength of a diode laser is tuned through an absorption line. Range resolved interferometry (RRI) on the other hand enables separation of signals from each sensor by employing a special signal processing technique, previously developed for position sensing and vibrometry.

The emission wavelength of the diode laser is controlled by the injection current and modulated with a combination of slow ramp (2Hz) and fast sinusoidal (49kHz) wave forms before coupling into a fibre. The slow ramp sweeps the central wavelength of the laser through a range containing a characteristic gas absorption, e.g. for methane at 1653nm. The RRI signal processing then demodulates the spatial location of the output signal to provide a TDLS-like signal for each gas cell.

We have demonstrated that signals from three gas cells can be independently distinguished and measured with minimal cross-talk. Depending on the optical topology and response time, methane can be measured with a noise-equivalent concentration between 20 and 200ppm. In other work, RRI has been combined with other measurands to multiplex 20 sensors along a single optical fibre.

Compared to standard TDLS, the principle innovation is the use of RRI signal processing. For RRI only a commercial field-programmable gate array (FPGA) processor, a standard laser driver and single photodetector are required. We use standard telecommunications fibre with low cost connectors and couplers. Optical alignment of the gas cells is eased by using a retroreflector design.

The new type of multi-point optical gas detection system features a single light source and detector multiplexed across many cells and offers significant advantages over existing sensors and networked sensor systems, including:

The system can be translated (via a change of laser) to enable detection of a range of gases as well as methane, including hydrogen sulphide, carbon monoxide and carbon dioxide, ethane, propane and ethylene and others (with detectable absorbances within the transmission window of standard telecommunications fibres).

We are seeking expressions of interest from industrial partners wishing to utilise the know-how on design, simulation, control and operation of novel multi-point gas sensing systems. Licensees and potential users of the technology are invited to get in touch. 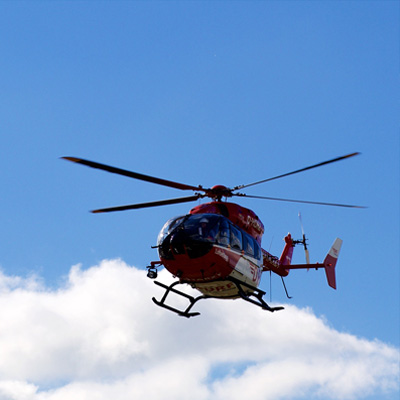