How to find us - Cranfield University at Shrivenham

Cranfield Defence and Security (CDS) is based at the Ministry of Defence establishment on the Oxfordshire/Wiltshire borders.

Shrivenham itself lies in the picturesque Vale of the White Horse, close to the M4 motorway which links London and South Wales. It is seven miles from Swindon, the nearest town, which lies off the M4 at the hub of Britain’s motorway network.

Bath, Cheltenham, Bristol and Oxford are all within an hour’s drive and London less than two hours away by car.

All visitors must ensure that the person they are visiting has pre-registered them at reception.

Address for Cranfield University at the Defence Academy of the UK

Directions by road from Oxford

Directions by road from Swindon

All visitors to Cranfield University at Shrivenham must make arrangements in advance, through the person you will be visiting.

On arrival at the main Visitor Reception Centre you will be asked to produce photo ID (passport, UK photo driving licence, government ID card or similar).

If you are travelling by car, providing full details of it in advance (make, model, colour, registration number) will help with the issue of a vehicle pass on arrival.

From Swindon Bus Station the S6 route to Oxford stops at the Defence Academy. Students can use their DMR (site access) pass to board the bus and purchase discounted tickets. The journey takes approximately 25 minutes. There are two services each hour.

Route planning information is available either at:

There are also train links from Swindon to South Wales, and to the Midlands and North.

Swindon is connected to several major UK airports.  These include:

Also close by are Bristol, Southampton and Cardiff airports. 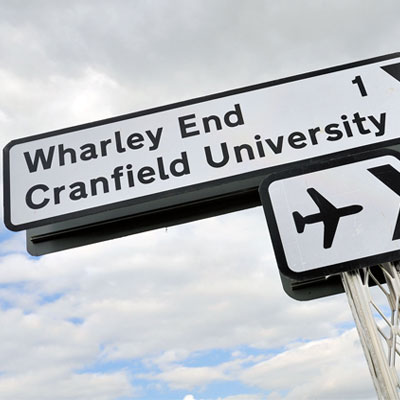 How to find our Cranfield campus

The Cranfield campus is located in the heart of Bedfordshire