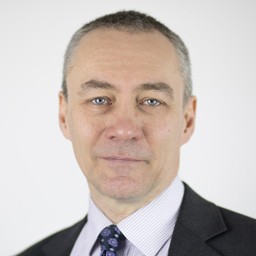 Ian is a qualified Management Accountant (FCMA), but changed functions mid-career, and has spent the last twenty years as HR Director (FCIPD) in four different businesses and industries (Volkswagen Group UK, Skanska UK, Network Rail, and currently River and Mercantile Group). He was previously a Trustee of the CIPD, the professional body for HR. Ian has a wide range of HR skills and experiences, but is particularly passionate about both Pensions and Diversity & Inclusion. He has been a Pension scheme Trustee for fifteen years, and scheme chair for over ten. In his current role as Group HR Director at River and Mercantile Group he is also involved in a project looking at the ability to choose which companies to invest in based on their HR practices rather than the financial results.

Ian’s undergraduate degree was from City University, London, and then he started work at Deloitte Haskins & Sells, which later became part of PwC. After qualifying as an accountant Ian worked as a management consultant, and later achieved an MBA from the Open University.

Outside of work and research, Ian is a very keen sportsman, both watching and participating, especially running Half marathons and doing triathlons. He has three grown up children. Ian is a trustee of CSC a charity that promotes the teaching of chess in schools, and prisons. He is also a supporter of Panathlon Challenge a charity that provides sporting events for disabled children. He also collects chess sets.

Ian started his DBA at Cranfield in 2016.

Ian’s DBA is focussed on a critical element of the Diversity & Inclusion debate, namely Neurodiversity, and specifically looking at “What factors enable or hinder employers to successfully recruit and retain people on the autism spectrum?”. Further details can be found at his website AutismInWork.com.

The reality is that people on the autism spectrum are massively under-represented in the workforce, with only 16% in full-time employment. There are many potential reasons for this, some of the most obvious being the communication challenges that many of the community have. There are, however, many examples of employers who are adapting their recruitment processes, and how they support people with autism, to be recruited and successful at work. Ian’s research is to understand what factors are most critical and why.

I am in the third year of my work at Cranfield. This means I have completed my Literature review, Impact plan and Research design. Now I am in the process of undertaking my research interviews. I am undertaking a qualitative research study focussed on four case study organisations.

I have presented my work to date at two BAM conferences, and won a prize for one of my papers. I have also participated in the World-famous research conference on Autism At Work hosted by Microsoft in Seattle.