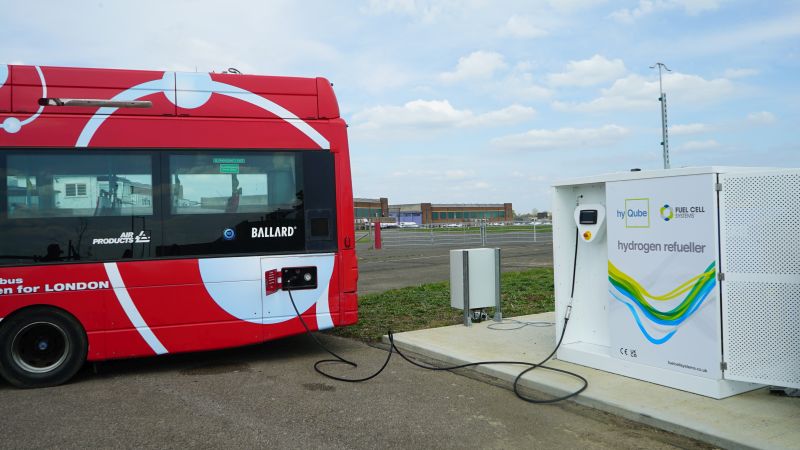 Cranfield University continues to lead the way in supporting the drive for net zero with the opening of a new hydrogen refuelling station on campus.  Vehicles from the University and outside which use the pioneering fuel can top-up at the new facility.

There are only a handful of hydrogen refuelling stations around the UK – with the one at Cranfield ideally placed for researchers working on projects such as autonomous vehicle development, as well as industry partners at the nearby Millbrook vehicle test track.

The station fills fuel-cell electric vehicles with pressurised hydrogen and is already used by one of Cranfield’s fuel-cell buses which the university uses in hydrogen research and development.

Hydrogen cars are not as common as battery electric vehicles (BEVs) because of a lack of infrastructure to support hydrogen refuelling. But they have the benefit of being able to travel further than BEVs on a single fill and can be refuelled quickly in a similar way to petrol and diesel vehicles.

Last year, the UK Government introduced its first Hydrogen Strategy, following its decision to ban sales of new petrol and diesel cars from 2030 and set ambitious targets to achieve net zero by 2050.

“The HyQube further builds on this. It can provide up to approximately 4kg of hydrogen per hour into a vehicle and will enable either on-road or off-road vehicles, in addition to agricultural or military vehicles, to be developed using Cranfield’s hydrogen technology.”

Hydrogen is set to play an ever-greater role in society, from decarbonising industry, to powering domestic boilers and vehicles.

Cranfield University’s Hydrogen Research Network brings together researchers covering the whole supply chain of hydrogen. Projects include the HyPER project, which examines the potential for low-carbon hydrogen to be the fuel of the future, and the ENABLEH2 initiative, which researches the use of liquid hydrogen in civil aviation.

Companies and academics wishing to engage with Cranfield on hydrogen vehicle research should contact hydrogen@cranfield.ac.uk. Alternatively, for information on Cranfield’s MSc in Management and Corporate Sustainability, please visit the website.