Cranfield stopover for pilots flying the flag for sustainable travel 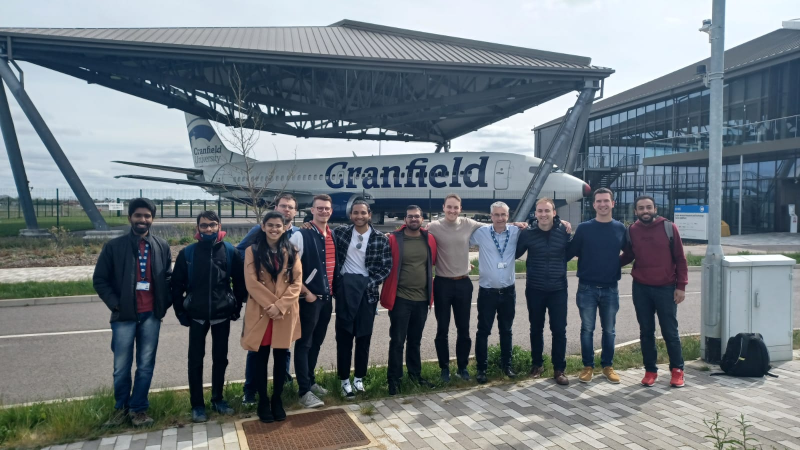 Members of the Cranfield Aeronautical Society meet the Diamondo pilots

A pioneering venture involving Cranfield alumni, to pilot a five-seater plane around the globe to promote sustainable aviation made a flying stop-off at Cranfield University – with aerospace students getting the chance to quiz the pilots involved in the impressive feat.

The team from Diamondo Earthrounding, a not-for-profit initiative which promotes sustainable technologies that accelerate aviation’s path to net-zero carbon emissions, began their flight in a Diamond Aircraft DA50 RG on January 2 this year, and will land back in Zurich to coincide with World Earth Day on April 22.

Swiss pilot Matthias Niederhäuser, aged 29, a Cranfield University alumni, and co-pilot Robin Wenger, also 29, landed at Cranfield Airport on Monday 18 April. Alex El Khawaja, project manager and reserve pilot, is another Cranfield alumni who helped the flight to happen. Matthias and Alex met while studying for their MSc in Airport Transport Management in 2017.

Highlighting sustainability projects around the world

Their visit to Cranfield - a global leader in the research, development and application of aerospace technology – followed visits to other sustainability projects including the largest solar power plant in the Caribbean, a reforestation project in Nicaragua, and a sustainable airport in India.

Once complete, their 111-day journey will have seen them cover 51,000 km and visit 73 airports. Their aircraft uses Sustainable Aviation Fuel (SAF), a clean substitute for fossil jet fuels.

Members of the Cranfield Aeronautical Society met the pilots during their brief stopover and had the chance to quiz Matthias and Robin on their adventures so far, hearing stories of how the pair crossed the Pacific Ocean in February in the small, propeller-driven aircraft.

Matthias, who pinpointed the community’s diversity and team collaboration as key aspects he enjoyed during his time at Cranfield, said the University was a place “where I learnt many of the things helpful in planning and executing this project successfully.

“Choosing Cranfield as one of the stopovers was particularly poignant for me.

“Cranfield’s world-leading research into alternative technologies for aircraft will be vital in attempts to make aviation more sustainable.

“The whole journey has been quite the experience.”

Alex added: “This whole trip has been a wonderful journey for all of us who have been involved. A big part of making sure it has been a success so far has been in planning it correctly. As you can imagine, flying in a world of COVID regulations requires you to have patience and flexibility. It’s been a busy few months for us all.”

Junaid Moolimani, President of Cranfield Aeronautical Society, said: “Meeting Matthias and Robin was the highlight of the academic year. What they have accomplished is nothing short of an inspiration to the many pilots and engineers out there.

“Furthermore, Diamondo Earthrounding is doing an outstanding job of increasing awareness about the importance of achieving net-zero emissions in aviation and making everyone aware of the vital need for cleaner skies.”

Matthias – who also flew in for his graduation at Cranfield – hopes to restart commercial pilot training with Lufthansa over the coming months.

Cranfield University, which has committed to its own target of net zero carbon emissions by 2030, has a long-standing focus on aviation and the environment. It became a member of the National Centre for Atmospheric Science (NCAS) in 2020 and has hosted its FAAM Airborne Laboratory since 2007.