His Royal Highness, the Duke of Edinburgh

Cranfield University is saddened to learn of the passing of its former Royal Visitor and one of its honorary graduates, His Royal Highness, the Duke of Edinburgh.

The Duke first visited the University in 1952 to support what was then the College of Aeronautics. His first visit is considered a pivotal moment in Cranfield’s history and one which secured the College’s future. His Royal Highness visited Cranfield on a number of occasions, delivering the first annual Handley Page Lecture in association with the Royal Aeronautical Society.

When the Cranfield Institute of Technology was established in 1969, he received the Institute’s first honorary degree and became the first official Royal Visitor retaining this role for 20 years, supporting the institution throughout this time. In 1990, he received a further honorary degree from Cranfield Institute of Technology. His last visit to Cranfield was in 2009 when he witnessed the University’s ‘Aviation Innovation’ showcase.

“We are honoured to have had the Duke of Edinburgh’s support for our institution over many decades as both the Royal Visitor and an honorary graduate.

“His Royal Highness, The Duke of Edinburgh, had a distinguished military career and was a passionate advocate of engineering and new technology. He has served our nation with huge distinction and his loss will be felt around the world.” 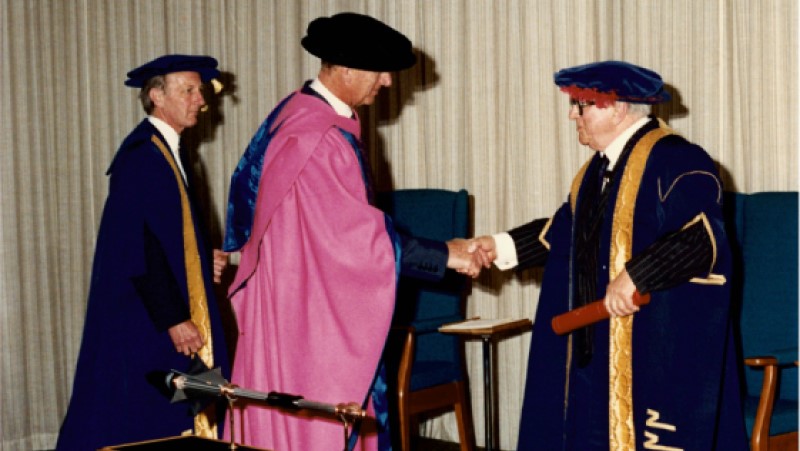 HRH, the Duke of Edinburgh receiving his second Honorary Degree in 1990