Airlines could be forced to cut passenger numbers or fly to fewer destinations in future due to climate change, according to a new study led by Cranfield University. The research found that aircraft now need longer distances, on average, to take off - as global warming, with warm air and slow winds, makes it harder for planes to get off the ground.

Where this is not possible at airports with shorter runways, such as those often found on small island holiday destinations, weight must be reduced by cutting passenger numbers or fuel, or by other means. It is the first study to combine measurements of air temperatures and wind speeds to calculate the precise impact on take-offs.

Scientists and engineers from four Universities in Britain and Greece, led by Cranfield University’s Dr Guy Gratton, analysed more than six decades’ worth of weather and aircraft data from Greek airports to find out how warmer air temperatures and changing winds have affected the ability of aircraft to take off.

Aviation is a big contributor of carbon emissions but this research shows a new way in which climate change is already having an effect on flights. This impact is likely to increase in future if carbon emissions continue to rise.

Guy Gratton, Associate Professor in Aviation and the Environment, said, “This work is especially significant because it shows that significant climate change has already happened, and has had a measurable impact on people and businesses in aviation.”

The study, published on Thursday 13th February in the journal Climatic Change, looked at take-off data from 1955 to 2017 for the Airbus A320, a typical medium-scale passenger jet, and the smaller de Havilland DHC8-400 at 10 Greek airports.

The team analysed data on temperature, headwind, surface conditions and runway slope to calculate the take-off distance required and the maximum possible take-off weight for the aeroplanes over more than 60 years.

The maximum take-off weight for the Airbus decreased by an average of 0.12% per year since it first entered service in 1988, while for the DHC8-400 it was 0.02% per year. The aircraft were also found to climb less quickly after take-off.

Further insight into how climate change is affecting the airline industry could be revealed by repeating the study for other island holiday destinations like the Caribbean or Scottish islands. It’s likely to be most significant on smaller airports with only one, shorter runway.

Previous research has shown that flights worldwide will be affected by increased clear air turbulence in future due to changes to wind shear at cruising altitudes under climate change.

Report: The impact of climate change on Greek airports

Based on ten Greek airports a new report highlights the indicated level of climate change in the Eastern Mediterranean area. 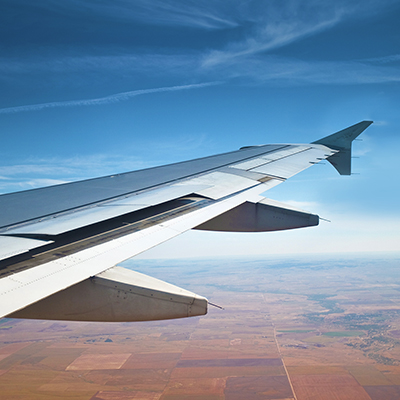 Aviation and the environment