Students to take to the skies for global space rocket competition 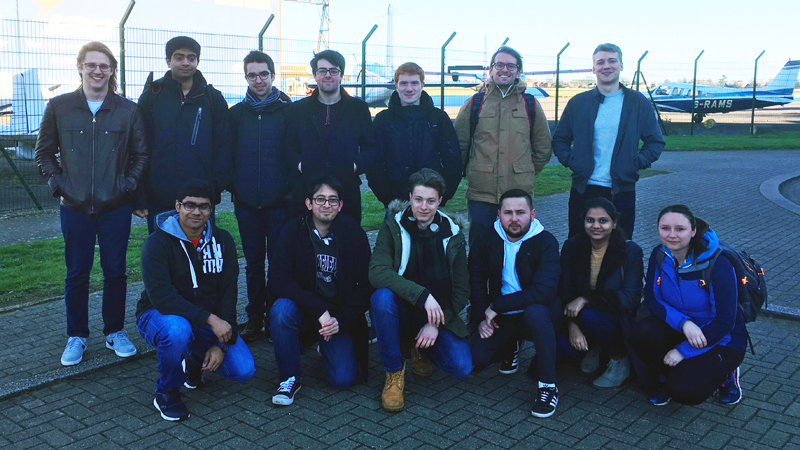 Members of the CRANSeds competition team

Students from Cranfield University are designing their own space rocket, which they hope to launch into the skies above the US later this year.

Members of the University’s CRANSeds society (which stands for Cranfield Students for the Exploration and Development of Space) are taking part in an extracurricular project to design and develop a rocket for the Intercollegiate Rocket Engineering Competition (IREC), which will take place in Las Cruces, New Mexico, in June.

The team – which comprises 15 people, all of whom are studying either the University’s MSc in Aerospace Vehicle Design or its MSc in Astronautics and Space Engineering – must visualise and build a rocket capable of carrying at least 8.8lb to a height of 10,000 feet above the ground.

If successful, they will compete against their peers at the IREC during the week of 17 June, launching their design into the skies above New Mexico.

Daniel Sieradzki, aged 23, is one of the students involved in the project. He said: “It’s an ambitious project. Although some of us in the team have been involved in rocket development before, none of us have ever done anything on this scale. So there is a lot of learning going on.”

The team are hoping their efforts will inspire others to follow in their footsteps.

Magdalena Grzybek, aged 33, said: “When I left school in Poland, my parents told me they wouldn’t let me study space as there was no future in it. Now here I am studying my passion at Cranfield University and entering a global competition that is inspiring the next generation of space engineers.

“In the past few years, we have seen things that no-one thought would be possible back then. Space has always been a very conservative industry, but in recent years we’ve seen a real change, with reusable rockets and commercial drivers democratising access to space and making it more affordable. Now anything seems possible.”

The CRANSeds students need to raise around £15,000 to enable them to take part in the competition, and are looking for donations from businesses and individuals to help them achieve their aims. For more information, please visit their fundraising page: https://www.gofundme.com/the-intercollegiate-rocket-engineering-competition.