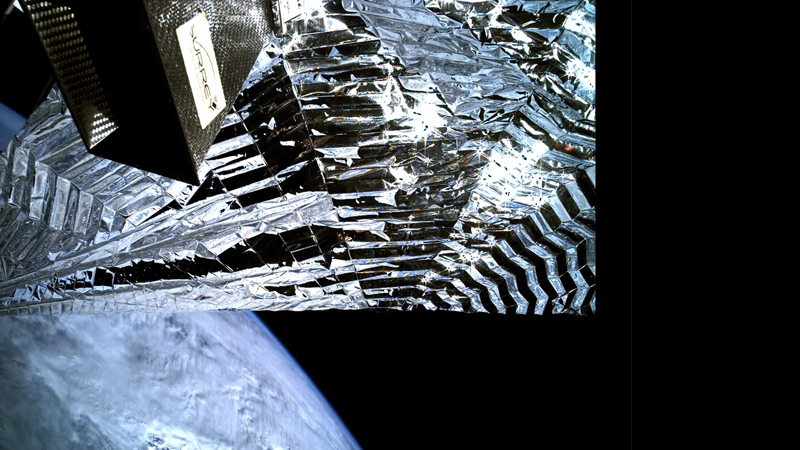 The Icarus-1 sail deployed on board TechDemoSat-1, with a view of Earth beyond. Credit: SSTL

An on-board camera has captured the moment a Cranfield University-designed “space sail” was successfully deployed in orbit above the Earth’s surface.

The Icarus-1 de-orbit drag sail was on board TechDemoSat-1, a satellite owned and operated by Surrey Satellite Technology Ltd (SSTL) that had come to the end of its mission.

This is the second successful deployment of a Cranfield de-orbit sail on a satellite built and owned by SSTL. The first, on Carbonite-1 in November 2018, was the world’s first deployment of an operational de-orbit sail. Using Cranfield’s technology, both satellites should be able to satisfy the internationally-agreed guidelines which require satellites to be removed from their orbits within 25 years.

The sail increases the tiny amount of atmospheric drag which still affects satellites up to orbit heights of 1,000km or more. The increased drag shortens the time the satellite will remain in orbit and so there is less chance of it becoming a space debris problem for future generations. Eventually the satellite will burn up safely in the denser layers of Earth’s atmosphere (about 100km up, and well above any aircraft).

Measuring around 6.7m2 when deployed, the sail consists of a thin Kapton sail in four trapezoidal panels, each supported by lightweight metal booms. The sail stows into an aluminium frame fitted around an external panel of the spacecraft and is restrained by a belt before deployment. Simple cord-cutters controlled by the host satellite control deployment, using stored energy in spring hinges to unfold the booms and the sail.

Stephen Hobbs, Head of Cranfield University’s Space Group, said: “We are delighted to see our Icarus de-orbit technology demonstrated successfully in orbit – again. With the Icarus sails now deployed on both TechDemoSat-1 and Carbonite-1, SSTL and Cranfield have demonstrated clear leadership in this technology. We hope to see many more satellites following TechDemoSat-1’s example to keep space clear of debris. It’s been great to work with SSTL on this mission.”

Sarah Parker, Managing Director of SSTL, said: “It is fantastic to see an image of TechDemoSat’s deployed drag sail captured by the onboard inspection camera. This in-orbit image of a deployed drag sail on one of our satellites is a first for us and is a fitting culmination of mission operations for this highly innovative small satellite.”