Wind of change for trees on farms

A European research project co-ordinated by Cranfield University to promote agroforestry could change how the British and European countryside looks and functions in the future.

The results demonstrate the benefits of integrating trees in a range of farming systems, which resonates with proposals in the current UK consultation on the future of food, farming and the environment, following Brexit.

The changes within agriculture in the last 50 years have encouraged larger fields, the removal of hedgerows and a more simplified system of farming. The efficiency of labour use has increased with mechanisation, but the downside is that this can create a less diverse environment with reductions in soil carbon and health, increased soil erosion and runoff, and reduced numbers of farmland birds.

New remote sensing and data analysis techniques are also increasing our awareness of trees outside of forests. A Forestry Commission study, based on 2016 data, indicates that 19% of all tree cover in Great Britain occurs in woods smaller than 0.5 ha, groups of trees and lone trees, equivalent to 3.2% of the land area in Great Britain.

Dr Paul Burgess, Reader in Crop Ecology at Cranfield, said: “Historically, agriculture and forestry have been managed and regulated separately. With recent concerns around food security, a demand for bioenergy, a need to reduce flooding, and to increase carbon sequestration and biodiversity, we need a new joined-up approach to land use.

One way to maintain production and gain environmental benefits is to work with farmers to identify how integrating trees can produce more sustainable farming systems while maintaining or increasing profitability."

With each climatic region there are different considerations and needs. The research groups have incorporated nitrogen fixing plants in wood pastures in Spain and Italy; used shelter belts to support crop production in eastern Germany; used GPS technology to improve reindeer husbandry in Sweden; introduced new multifunctional hedgerows in Brittany and combined fruit trees with arable cropping in Switzerland.

Systems in the UK include cattle grazing in Epping Forest, grazed orchards, silvoarable systems, when crops are grown simultaneously with a long-term tree crop to provide annual income while the tree crop matures, and woodland egg production. In total 46 “agroforestry innovation” briefing sheets have been produced.

As trees grow slowly, the four-year project time span meant that it was often necessary to use computer models to forecast the long-term effects. Combining field measurements and building on Cranfield’s strong background in bio-economic modelling, the project has predicted how combinations of trees with crops or pasture will affect crop yields, tree growth, and environmental outputs such as carbon sequestration in different locations.

The groups also researched not just commercial profits but also recreational and societal benefits. They found that the public enjoy a mosaic landscape and valued both urban and rural locations, enjoying access to both landscapes.

Working with European Agroforestry Federation, the project has produced 15 policy recommendations, for review at EU level. These recommendations can also be applied in the UK as we leave the Common Agricultural Policy. The reduction in direct payments and a greater focus on payment for public services, proposed by the UK Government, could provide farmers with greater incentives for integrating trees on farms.

Dr Burgess concludes: “Agroforestry, put simply, is the integration of trees with farming. The project has demonstrated that agroforestry practices enhance biodiversity, increase carbon sequestration and reduce runoff, and they can improve animal welfare whilst maintaining agricultural production.”

Cranfield University is currently working with the Woodland Trust, the Soil Association, and the Farm Woodland Forum on how the integration of trees can be fed into the objectives of the UK’s land use policy, which is still being considered by the Government as we exit from the EU.

AGFORWARD (AGroFORestry that Will Advance Rural Development) is a four-year research project co-ordinated by Cranfield University funded by the European Union’s Seventh Framework Programme for Research and Technological Development (FP7). The value of the grant was €5,995,000.  It started in January 2014 and was completed in December 2017

The project builds on existing agroforestry experiments, current on-farm agroforestry trials, and previous research projects such as “Silvoarable Agroforestry For Europe (SAFE)”. The European Agroforestry Federation is a partner. agforward.eu 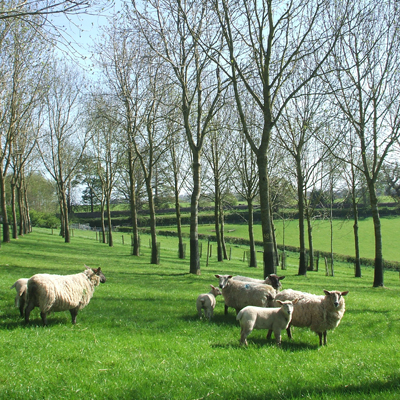