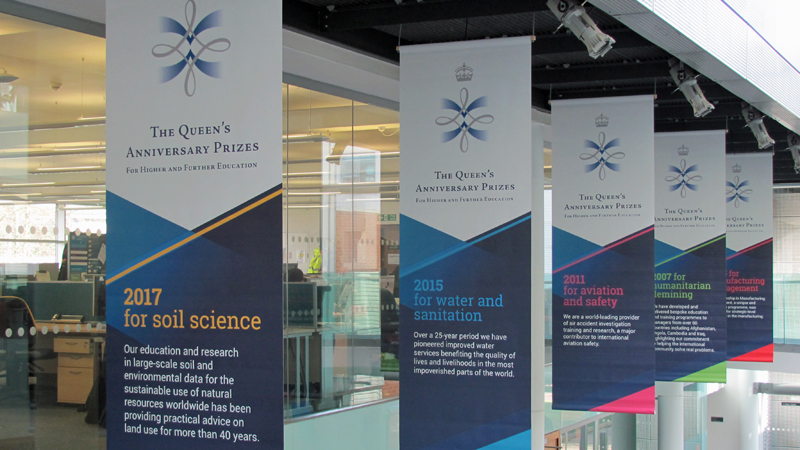 Cranfield University visited Buckingham Palace today to receive its fifth Queen's Anniversary Prize from HRH The Prince of Wales, with HRH The Duchess of Cornwall, on behalf of Her Majesty the Queen and his Royal Highness the Duke of Edinburgh.

Collecting the medal on behalf of the University was Sir Peter Gregson, Cranfield’s Chief Executive and Vice-Chancellor, and Professor Leon Terry, Cranfield’s Director of Environment and Agrifood.

Sir Peter Gregson said: “We are honoured to be winners of the Queen’s Anniversary Prize for the fifth time. Soil science is an integral part of the University’s past, present and future. Information held at Cranfield continues to influence land management policy nationally and internationally. This award is a well-deserved acknowledgement of the work of current and former academic, technical and support staff.”

The award is in recognition of the University’s world-class excellence and achievement in research and education in large-scale soil and environmental data for the sustainable use of natural resources in the UK and worldwide. This is the first time in the Prize’s history that an award has been given for soil science.

Recipients of the award were hosted afterwards by Their Royal Highnesses at a reception for the winners, including Cranfield’s Chancellor, Baroness Young of Old Scone and Dame Deirdre Hutton, Pro-Chancellor of Cranfield University; along with academics, researchers and students from the environment and agrifood team.

Cranfield has a long history of soil science research and education. In England and Wales alone, the equivalent of over 200 years of fieldwork has identified over 750 different types of soil. Together with a unique, parallel international soils archive, the University has created the largest collection of soil information in Europe.

The University has been designated by (DEFRA) Department for Environment and Rural Affairs as the national reference centre for soils.

Professor Ian Boyd, Chief Scientific Adviser at DEFRA said:  “Soils are an essential resource and I am delighted that their importance has been recognised through this prestigious award to Cranfield University. I congratulate Cranfield on their leadership in this important field.”

Professor Leon Terry, said: “We are delighted to be the first university to win an award for soil science.  For more than 40 years, Cranfield has been ensuring that practical advice on land use is linked to the protection of soil assets in the national interest. Our information and soils expertise is shared nationally and globally to ensure soil is recognised as a vital resource and as an essential natural capital.”

Cranfield is one of only eight institutions to have won the award on five or more separate occasions. The  four previous awards were as follows:

About The Royal Anniversary Trust

The Royal Anniversary Trust is an independent charity - registered number 1,000,000 - concerned with the advancement of education for public benefit.  It was set up in 1990 with the object of carrying out a programme of events and programmes during 1992, with official endorsement and funded and supported from private sources, to mark the 40th anniversary of The Queen’s accession and her years of service as Head of State.  The Trust currently works to promote world class excellence in UK universities and colleges through oversight and management of The Queen’s Anniversary Prizes for Higher and Further Education, part of the UK honours system.