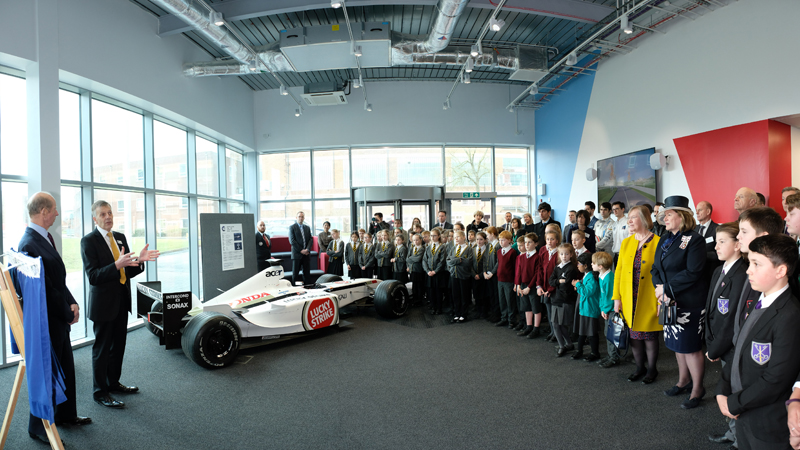 His Royal Highness unveiled a plaque in the foyer alongside a BAR F1 racing car, and then went on to view the extensive IMEC facility. The building is the centre for transport research at the University. It also contains the control room for the recently completed MUEAVI (Multi-User Environment for Autonomous Vehicle Innovation) roadway. The two facilities provide the University with cutting-edge technology for autonomous vehicle research.

Sir Peter Gregson said: “We are delighted to welcome His Royal Highness to Cranfield. The extensive campus improvements underway and the newly-opened facilities have provided the opportunity to see first-hand how the very best of our pioneering research and education is benefiting students and is bringing investment to the region impacting businesses internationally.”

The group met and viewed projects by students from the Advanced Motorsport Engineering courses who explained their group design project, Electric Dakar: a conceptual design and performance prediction of an off-road competition electric vehicle. MSc students from the Automotive Mechatronics course demonstrated an autonomous pod.

This was followed by a demonstration of Cranfield’s Motorsport Simulator with state-of-the-art sustained g cueing technology. It was driven by Advanced Motorsport Engineering MSc student Goffredo Pirro, whose father Emanuele Pirro won the Le Mans 24 Hours race on five occasions and drove in Formula One.

Local school children from Holywell School, Kymbrook Lower School, Brooksward School and Sharnbrook Primary, who are all ‘Build a car of the future’ competition winners, showed off their ideas to the visitors. The contest was part of the Department for Transport’s campaign Year of Engineering and the Engineering Talent Campaign, led by the Royal Academy of Engineering.

Helen Nellis, HM Lord-Lieutenant of Bedfordshire, said: “It was a pleasure to show The Duke of Kent and invited VIP guests our fine Cranfield University working at the leading edge of innovation globally. Cranfield University is lucky to have such hugely enthusiastic students and staff pushing the boundaries of science and engineering. Poised at the centre of the Oxford, Bedford, Cambridge Arc, Cranfield plays a pivotal role regionally, nationally and internationally”

The occasion also provided the tour group with an opportunity to travel a section of the MUEAVI roadway to visit the state-of-the-art glasshouse. This impressive facility has recently been built to allow experiments to be conducted on plant/soil/environment relationships, which are critical to crop production. His Royal Highness also visited the soil management facility, featuring environment simulation tools, showing how interactions like rain, compaction, vehicle or drainage all affect soil.

It provided the guests with the chance to meet staff who were part of the team recognised with a Queens Anniversary Prize, which was presented to the University last month. Cranfield received the award for its research and education in large-scale soil and environmental data for the sustainable use of natural resources. It was the first time in the Prize’s history that an award has been given for work in soil science and was Cranfield’s fifth award from The Royal Anniversary Trust.