A group of students from Cranfield University has been working with leading defence service and support organisation, Marshall Aerospace and Defence Group, to utilise mixed reality in remote Maintenance, Repair and Operations (MRO).

Mixed reality is the merging of real and virtual worlds to produce new environments and visualisations where physical and digital objects co-exist and interact in real time.

As part of their studies, the students were challenged to design a system which would enable the inspection of the exterior of the aircraft, ground engine runs and flight tests to be shared with a remote team. Using mixed reality, data from diagnosis, maintenance and repair tasks can be shared all over the world, allowing crews on the ground to access best practice guidance from maintenance specialists wherever they are.

The group, who are all studying manufacturing at Cranfield, have presented the results of their project to senior Marshall Aerospace and Defence Group leaders at their headquarters in Cambridge.

This exploration of the productivity gains derived from the use of mixed reality is the first major project sponsored by Marshall as part of group initiative to utilise new technologies across the Marshall Group. The initiative has been supported by industry-leading partners enabling the group to shape the way forward and test new ideas.

Oliver Drury, External Communications Director for Marshall Aerospace and Defence Group said: “It has been a great collaboration between our two organisations which started as a concept in February, and returned a working prototype only three months later.”

Dr John Ahmet Erkoyuncu from Cranfield University who supervised the students, said: “We are extremely grateful for Marshall for supporting this project. It enabled the students to get a fantastic insight into the challenges of real-world maintenance, repairs and operations. Working closely with industry on group projects such as this is an important part of the student experience at Cranfield.” 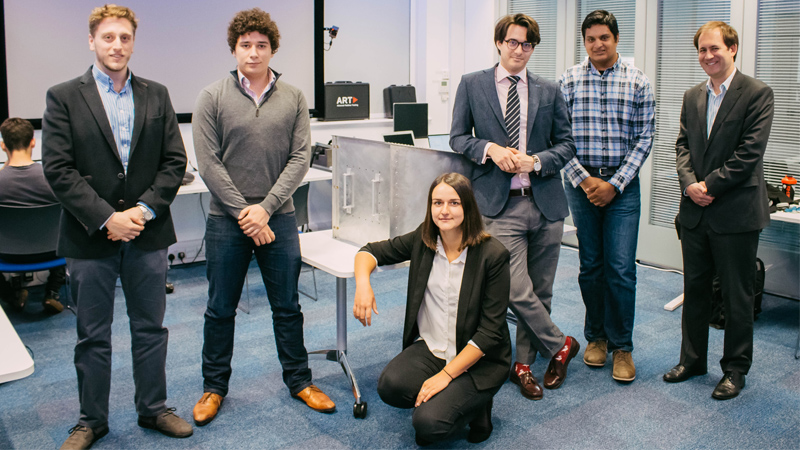 About Marshall Aerospace and Defence Group

Marshall Aerospace and Defence Group is a leading independent aerospace and defence company, specialising in the conversion, modification, maintenance and support of military and commercial aircraft, the design and manufacture of special mission vehicles and shelters for the armed forces and humanitarian aid organisations, and the provision of personnel and training into advanced engineering sectors.  The company’s primary customers are major platform OEMs - such as Lockheed Martin, Boeing, Airbus, BAE Systems, Bombardier, and Thales.

The company has more than 80 years’ experience in aviation and a full-spectrum engineering capability that includes project/product conception, design, manufacture, test, certification, integration/embodiment, in-service support and legacy platform/system sustainment. These capabilities have been exported to more than 33 countries and the company is working with 16 of the world’s Air Forces in relation to the C-130 platform, 12 Ministries of Defence and supports key programmes in the air, on land and at sea.

Marshall Aerospace and Defence Group is headquartered in Cambridge, where it employs more than 1,700 highly trained personnel on its 800 acre site, which includes 1.2 million ft2 of hangar space plus the company-owned Cambridge Airport. The company also has other sites in the UK and offices in the Netherlands, the UAE and Canada.

Marshall Aerospace and Defence Group is part of the Marshall Group, which employs more than 6,500 worldwide and which has a turnover of £2.7 billion and is the 19th largest privately owned business in the UK.