Speaking of the event, John said: “I greatly enjoyed talking to this knowledgeable audience about the beautiful white bird and would like to thank everyone for their generosity to the RNLI.”

Aviation was always the theme of Mr Hutchinson’s career after he joined the RAF in 1955 and went on to fly corporate aircraft before joining BA in 1966. These roles enabled John to fly more than 70 different aircraft types. Even in retirement, John has worked as a consultant to the US High Speed Research Programme, sits on Air Safety committees and advises as an Expert Witness in aviation-related legal actions.

During its 27 years in operation, Concorde made around 50,000 flights and flew more than 2.5 million passengers at a cruising speed of 1350mph – more than twice the speed of sound.

Guests at the event were shown the university’s aircraft engine collection, including a Rolls-Royce Olympus Concorde Aircraft engine with more than 200,000 hours at Mach 2 and a Sir Frank Whittle W2/700 engine that was awarded an IMechE Engineering Heritage Award in May 2015.

The event, which was held in the award-winning Aerospace Integration Research Centre (AIRC), was free to those attending however donations to the Royal National Lifeboat Institution (RNLI) were gratefully received by organisers.

The IMechE is an independent professional association and learned society that represents mechanical engineers and the engineering profession. Local ambassadors co-ordinate events to enable members and other interested parties the opportunity to keep up with the latest engineering ideas, innovations and thought leadership. 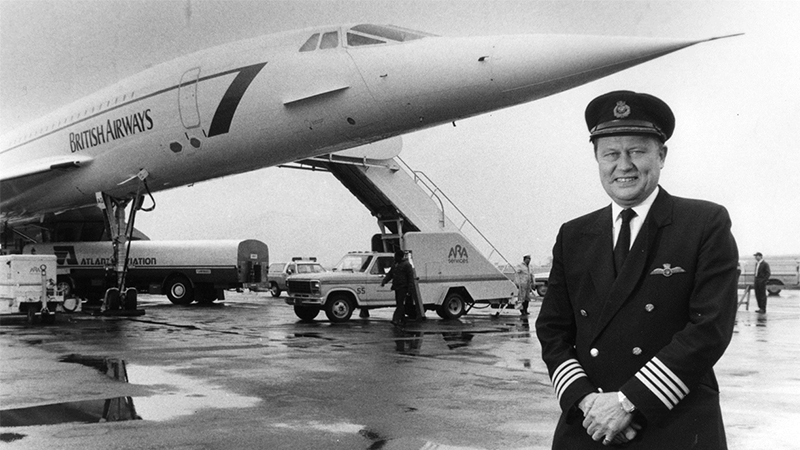 John Hutchinson in his British Airways pilot uniform by Concorde