Putting Soil Science on the map

Local students are helping to kick-start a project aiming to produce a comprehensive map of the soil quality from central Luton.

Sixty Year 11 students from Denbigh High School in Luton collected over 100 soil samples and conducted some of the design and chemical analysis as part of the Soilstix project.

Dr Jacqueline Hannam from Cranfield University and Dr Matthew Partridge from the University of Southampton are leading the project and hope to support wider research into soil degradation. Once the data has been mapped, the information will be documented in the national soil archive for future analysis by Cranfield University.

Dr Jacqueline Hannam, Senior Research Fellow in Pedology at Cranfield, said: “It has been great to get Denbigh High School students excited by soil, our most valuable resource on the planet. Soils in urban areas are often forgotten but they still provide important cultural services to us.

Using simple equipment such as kitchen scales, empty tuna tins, disposable urinalysis sticks and coffee filters has meant that pupils can really get involved in collecting data, understanding the different tests, and what the subsequent results mean. We hope to expand the project to other areas within the UK in 2018 using the same methods with other school pupils.”

Dr Matthew Partridge, Senior Research Fellow at the University of Southampton said: “We have been fortunate that the project has been generously sponsored by a number of organisations, such as the Royal Society of Chemistry, the British Society of Soil Science and Aerobie AeroPress. This sponsorship has enabled us to buy the testing materials needed to complete this project. The Prebend Street SMART homeless outreach centre in Bedford really helped us by using the tuna from our tins in their kitchens so we could have plenty of empty tins for the project.”

Cranfield University was recently awarded its fifth Queen’s Anniversary Prize for its research and education in large-scale soil and environmental data for the sustainable use of natural resources in the UK and worldwide. This is the first time in the Prize’s history that an award has been given for soil science. 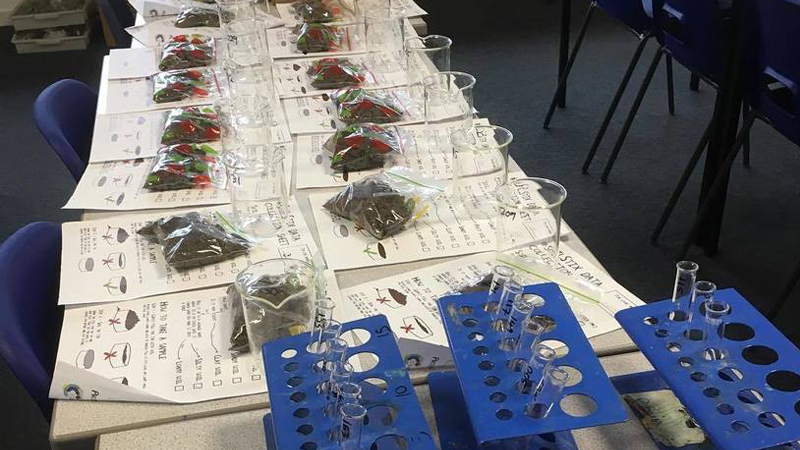 Environment and Agrifood at Cranfield

For the past 50 years, Cranfield has been contributing to enhancing natural capital and ensuring that global food systems are more resilient for the future. We are recognised worldwide by industry, government and academe for our research and teaching in plants, soil, water and air.

We believe that environmental problems can be alleviated through technological innovation and risk management.

Cranfield is a key partner in two of the four UK Government-sponsored Agri-tech Centres – Agri-Epi (Agricultural Engineering Precision Innovation Centre) and CHaP (Crop Health and Protection), with over £10 million invested in new infrastructure since 2017.

Our education, research and consultancy is enhanced by our world-class facilities including the National Reference Centre for Soils, which houses the largest collection of its kind in Europe and is recognised as the UK’s definitive source of national soils information, and our big data visualisation suite, which has tools to analyse big data collections including environmental resources from 280 countries/territories worldwide.

In 2017, Cranfield was awarded the Queen’s Anniversary Prize for research and education in large-scale soil and environmental data for the sustainable use of natural resources in the UK and worldwide, the first time in the Prize’s history that an award has been given for soil science.