A team of Cranfield space research graduates has won a prestigious Sir Arthur Clarke award for its design to send two astronauts on a fly-by mission to Mars.

The prize, awarded by The Arthur C. Clarke Foundation and its UK partner the British Interplanetary Society, is given in recognition of notable contributions to space exploration, particularly British achievements.  It was presented to the team by astronaut Tim Peake at a ceremony in Manchester.

The award recognises significant or outstanding achievements by a school, undergraduate or postgraduate student team or individual for any space-related activity.

This is the second prize the MSc Astronautics and Space Engineering graduates (2016) have won for their Mars fly-by mission design, which was created for the Mars Society’s Gemini Mars competition. The students were asked to design a mission to Mars which could be launched as cheaply, safely and simply as possible by no later than 2024. The Cranfield team’s project, under the name Cranspace – which was planned in their non-university time – included a design of the modules astronauts would live in, living factors such as oxygen provision during the journey, as well as the general health of the astronauts.

Tiago Matos de Carvalho, a PhD student at Cranfield, said:  “I’m delighted to see our work and efforts are catching people’s imagination and interest, inside and outside the space field. I found it very meaningful to receive the Sir Arthur Clarke Award for our space exploration proposal considering the visions that he had for spaceflight and it was fantastic to receive the prize from Tim Peake.”

Team member, Will Blackler, also won Airbus’ annual National Student Space competition in 2016 with his proposal for using algae to provide astronauts with oxygen on long space missions, a component of this mission plan.

Other team members have gone on to careers primarily in the space industry or further study. 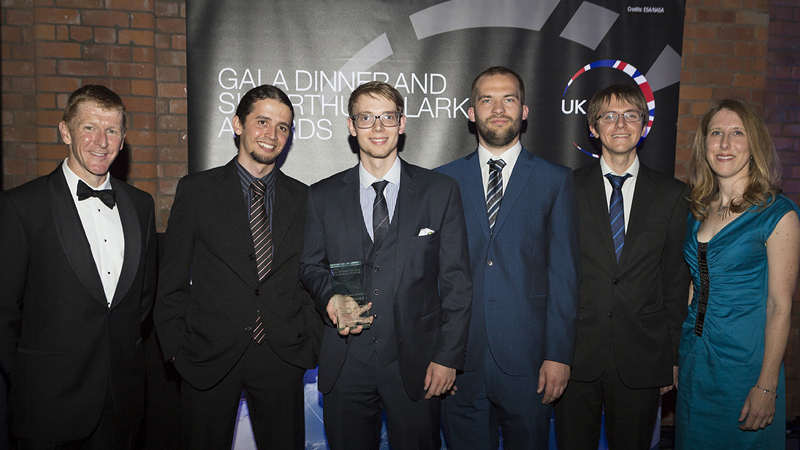 About Astronautics at Cranfield

Cranfield University offers an MSc in Astronautics and Space Engineering, and will prepare students for a career in this sector, including earth observation, planetary exploration, launch vehicles, to spacecraft operations and more.

About Aerospace at Cranfield

At the forefront of aerospace technology for over 60 years, Cranfield takes a practical and holistic approach right across the business of flying. We bring together aeronautical engineering, materials and manufacturing with expertise in aviation business processes and practices. We play a big part in the aerospace business sector with close commercial partnerships with Airbus, BAE Systems, Boeing and Rolls-Royce, to name just a few. Our varied aerospace and aviation activities are underpinned by advanced facilities, including some unique to Cranfield – from our own airport with flying laboratories and flight deck simulators to industrial-scale gas turbine engine test facilities used for performance and diagnostic studies.