Cranfield University is helping a team of volunteers return a Hawker Typhoon Mk1B to flight – by giving them access to the University’s Napier Sabre IIa, WWII aircraft engine.

Dave Robinson, the project founder, said: “It is one of a small number of engines worldwide which could be restored to working order. This engine is believed to have only been used as a teaching aid and to be the best option for returning the RB396 to flight.

“It is thought to be the only running Napier Sabre outside the US but it also makes RB396 the only Typhoon outside of the RAF to have ever secured a suitable engine.”

The engine will face strict assessment before being rebuilt in line with Napier and RAF overhaul manuals by an approved restoration facility in the UK.

It was collected in early January and plans are being drawn up to take it to its new home at Goodwood, where it will form the basis of a fundraising campaign to make the RB396 airworthy once again.

Professor Iain Gray, Director of Aerospace said: “We’re delighted to help the Hawker Typhoon Preservation Trust in its endeavour to return the Hawker Typhoon MK1b (RB396) to flying order by making our Napier Sabre engine available to them. Cranfield University has been key to the aerospace sector for the past 70 years and I am pleased we can help with both the restoration of this vintage aircraft and the associated encouragement to young people to join this great industry.”

The HTPG is overseeing the rebuild of the only genuine combat veteran Hawker Typhoon Mk1B in existence. RB396 was one of the 3317 Typhoons built during the early 1940s. The aircraft saw combat with No. 121 Wing of the Second Tactical Air Force’s No. 83 Group and survived a forced landing on 1 April 1945.

This airframe will form the basis for a major restoration project, which will be carried out by professional organisations and individuals across the country. Once complete, this will be the world’s only airworthy example of the Typhoon, and the first Typhoon to be operated in private hands. The restoration is estimated to cost US$4-6 million.

Once airworthy, the aircraft will fly in remembrance of the 666 Typhoon pilots killed during the course of WWII. The return to flight is being planned to coincide with the D-Day 80th commemorations in 2024. 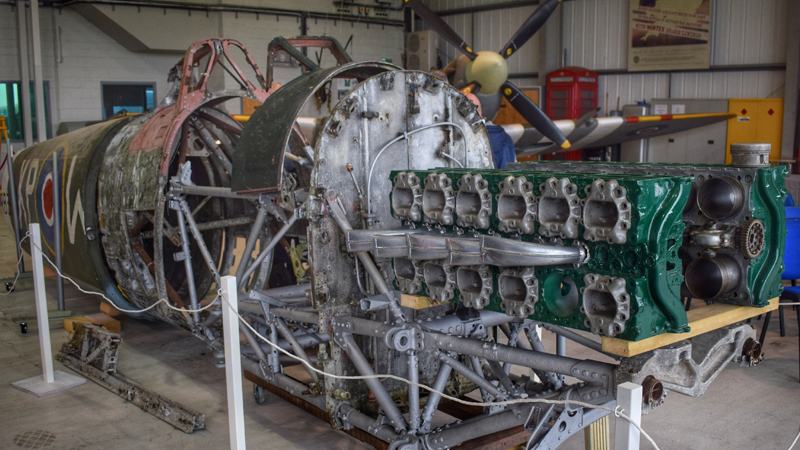 Typhoon squadrons wreaked havoc before, during and after the D-Day landings and flew countless sorties in support of the Allied advance into occupied Europe in 1944-45, where the aircraft came into its own as a potent fighter-bomber. Typhoons tore low across the countryside attacking armoured vehicle and troop concentrations with four 20mm Hispano cannons, rockets and bombs and it was in this role that the Typhoon achieved legendary status. It was, however, a costly campaign, with more than 150 Typhoon pilots losing their lives in combat over Normandy alone, and a further 36 becoming prisoners of war.

The Hawker Typhoon Preservation Group is a registered charity in England and Wales, number 1167143, and has been established to oversee the rebuild of the only genuine combat veteran Hawker Typhoon MkIb in existence. Once airworthy the aircraft will fly in remembrance of the 666 Typhoon pilots killed during the course of WWII – a living memorial, finally, to a forgotten brotherhood. The return to flight is being planned to coincide with the D-Day 80th commemorations in 2024.

Cranfield is the number one university in Europe for aerospace and the only university in the world to own and run an airport and to have airline status. We have been at the forefront of aerospace technology for 70 years.

Our education, research and consultancy is enhanced by our world-class facilities including the National Flying Laboratory Centre - a unique national asset which provides a hands-on, flying experience, along with flight deck simulators and industrial-scale gas turbine engine test facilities used for performance and diagnostic studies. The Aerospace Integration Research Centre, a new £35 million innovative research centre which will change the design of future aircraft, is currently under construction and will open later this year.