Cranfield University has pledged its support for the military community and their families by signing up to the UK Armed Forces Covenant.

The UK Armed Forces Covenant is a Government initiative and provides organisations an opportunity to show their support for military personnel and represents “a promise from the nation that those who serve or have served, and their families, are treated fairly.”

Sir Peter Gregson, Chief Executive and Vice Chancellor of Cranfield, said: “We are delighted to add our name to the UK Armed Forces Covenant. Support for our Armed Forces, which contribute so much to our university, community and country, has been in the DNA of Cranfield since our founding on the site of RAF Cranfield 70 years ago.”

Mark Lancaster, Parliamentary Under Secretary of State for Defence Personnel and Veterans, witnessed the university signing by Sir Peter Gregson. The University has several reservists and former military personnel among its staff who also attended the signing.

Mr Lancaster who was in the Army between 1988 and 1990 and continues to serve in the Reserves, said: “With the top class postgraduate education it offers the military community, Cranfield University has become the latest institution to back the Covenant. We enshrined the Covenant in law to ensure the service community gets fair treatment and, with its specialisation in the likes of science and engineering, this university will bring as much to the Forces as it does to this constituency.”

Cranfield is one of the world's leading universities for defence and security education, research and consultancy. It has been a postgraduate academic provider to the UK’s Ministry of Defence for over 30 years.

Find out more from our staff on the Cranfield blog 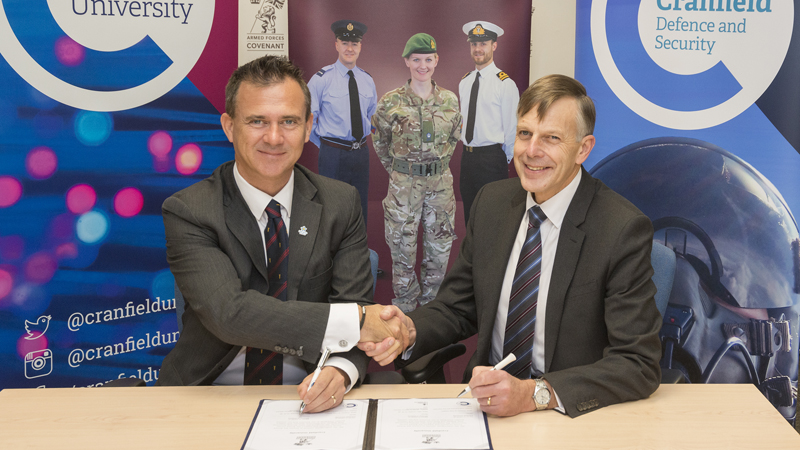