Cranfield graduates have won a $10,000 (USD) prize for their project proposal for a two-person flyby mission to the red planet in The Mars Society’s Gemini Mars competition.

The MSc Astronautics and Space Engineering (2016) graduates beat a shortlist of nine other teams of engineering students from universities around the world, including Massachusetts Institute of Technology (MIT) and Purdue University in the United States.

The Cranfield team presented their plans to aerospace experts, including NASA representatives, in Washington D.C, to win first prize.

The competition asked students to design a mission which could be launched as cheaply, safely and simply as possible by no later than 2024. The Cranfield team’s project – which was planned in their non-university time - included a design of the modules astronauts would live in, living factors such as oxygen provision during the journey, as well as the general health of the astronauts .

The Mars Society is the world's largest and most influential space advocacy organisation dedicated to the human exploration and settlement of the planet Mars.

Team member Tiago Matos de Carvalho, who is studying for his PhD at Cranfield, said “I think this prize will make a difference to our careers.  We had to work together in our extra time and work out how to reach out beyond the space engineering community to the wider public with our research and to get support for our work.  All of this will be valuable in our careers, either in academia or in industry.” A second member of the team, Will Blackler, won Airbus’ annual National Student Space Competition award earlier this year for his proposal to use algae to create oxygen on board a space craft for long space missions.

Professor Dave Cullen summed up the feeling in Cranfield’s Space Group saying “We’re all on cloud nine – it’s a fantastic validation of our activities here at Cranfield that a team of our MSc and PhD students can go out and win, against competitors from all corners of the planet, such a prestigious global competition. We’re immensely proud of every one of them.” 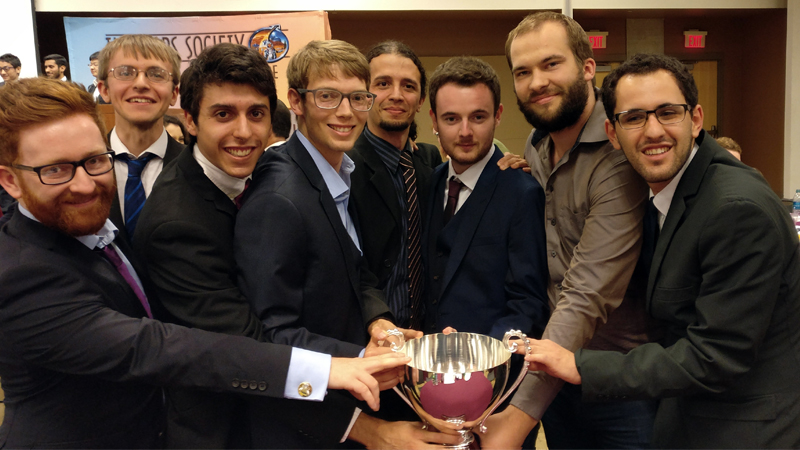