Female scientists on their soapboxes at thecentre:mk

Female scientists took to specially-made soapboxes on Saturday (9 July) to give shoppers in thecentre:mk an insight into the research being undertaken in and around Milton Keynes.

Members of the public got directly involved by demonstrating Jupiter’s orbit, squashing rotten vegetables and pretending to be rats. Speakers also took the audience to the moon, explained why people are addicted to crosswords and even how we can make energy from our own faeces.

Dr Jacqueline Hannam from Cranfield University was the organiser of the event and said: “There was such a buzz and the people of Milton Keynes really helped us to bring science to life. This was the first event from a nationwide programme to come to the new city, and given the success, we hope to bring it back again in 2017.”

Iain Stewart, MP for Milton Keynes South, and the Deputy Mayor of Milton Keynes, Cllr David Hopkins, also lent their support to Soapbox Science during the course of the afternoon.

Mr Stewart said: “It was a fantastic event and I was very pleased to see so much interest from members of the public. The speakers were all very engaging and clearly had a passion for what they are researching. Projects like this are so important to promote science so I hope to be attending again next year!”

Dr Julia Cooke from the Open University added: “Soapbox Science has the dual aims of bringing science to the people, direct from the scientists; and promoting the visibility of women in science. Saturday’s event did both of these in such an enjoyable way. I was thrilled to see the expressions of interest, concentration and amusement on the faces of people in the audience.”

This event was part of a nationwide initiative by Soapbox Science, which aims to bring science to the people and challenge gender stereotypes in science careers. Women are still under-represented in many science disciplines particularly in more senior positions. Soapbox Science events are part funded by the Science and Technology Facilities Council.

Soapbox Science Milton Keynes was sponsored by Cranfield University, British Society of Soil Science and ErrantScience. The soapboxes were made and donated by PJL Carpentry, a Milton Keynes carpentry firm.

Further information is available on the Soapbox Science website: www.soapboxscience.org 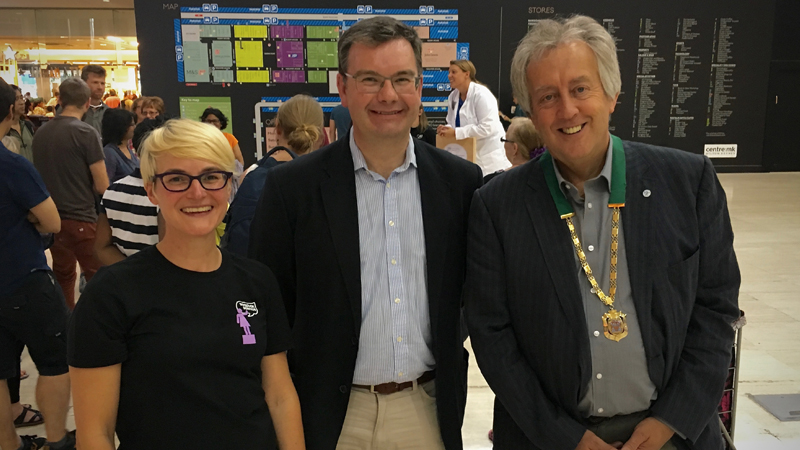