Tata Power’s Strategic Engineering Division (Tata Power SED) and Cranfield University are pleased to announce the signing of a Memorandum of Understanding (MoU) developing the relationship between the two organisations.

The MoU sets out the intent of the organisations to explore the possibility of entering into a strategic partnership through research and development and academic study in the areas of defence-related engineering and emerging technologies. These include areas such as MoDAF (The British Ministry of Defence Architecture Framework) for software systems, guns, military vehicles (including tracked) for both combat and launcher vehicles, GVA (generic vehicle architecture), and weapon systems.

The MoU was launched with a signing ceremony at DefExpo, a major international defence and security exhibition being held in India this week. Dr Simon Harwood, director of Defence and Security at Cranfield University, said: “This MoU is an exciting development of Cranfield’s relationships with India and with an industrial powerhouse like Tata, we are excited to explore where this relationship will go.

“Cranfield has an extensive alumni network in India dating back to 1945 and the university is highly regarded for its expertise and career-improving opportunities in the area of science, technology, engineering and management. We hope to build stronger relationships with Tata Power SED, which has such a strong presence in the defence sector with a growing interest, for our mutual benefit.” he added.

At the signing ceremony, Rahul Chaudhry, CEO of Tata Power SED said: “Tata Power SED has been committed to ‘Make in India’ for over four decades.

“With the present Government giving the necessary emphasis on the defence sector, we would like to extend the ‘Make in India’ definition to ‘Create in India’ for which we would like to leverage the experience and expertise of Cranfield University in defining standards and implementing them in our processes for design and development of critical defence systems and sub-systems for the country. We have taken this approach to truly contribute to our country’s self-reliance.” 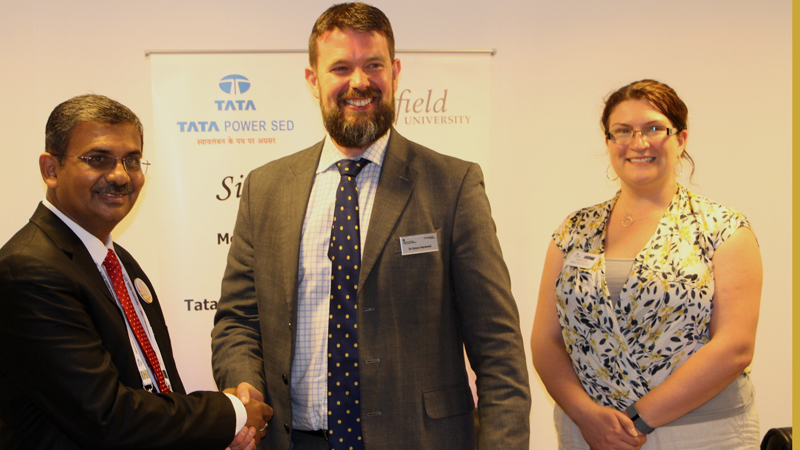 Dr Simon Harwood with representatives from Tata and UKTI

The Tata Power Company Limited, Strategic Engineering Division (Tata Power SED) has been a leading private-sector player in the indigenous Design, Development, Production, Integration, Supply and Life-cycle Support of mission critical Defence Systems of Strategic importance, for close to four decades. During this period, the Division has partnered the Ministry of Defence (MoD), the Armed Forces, DPSUs and DRDO in the development & supply of state-of- the-art Systems and emerged as a Prime Contractor to MoD for Indigenous Defence Production when it secured Orders for Pinaka Multi Barrel Rocket Launcher, Akash Army Launcher and Integrated EW System for the Indian Army and for the Akash Air Force Launcher, COTS-based Automatic Data Handling System for Air Defence and Modernisation of Airfield Infrastructure (MAFI) for the Indian Air Force.