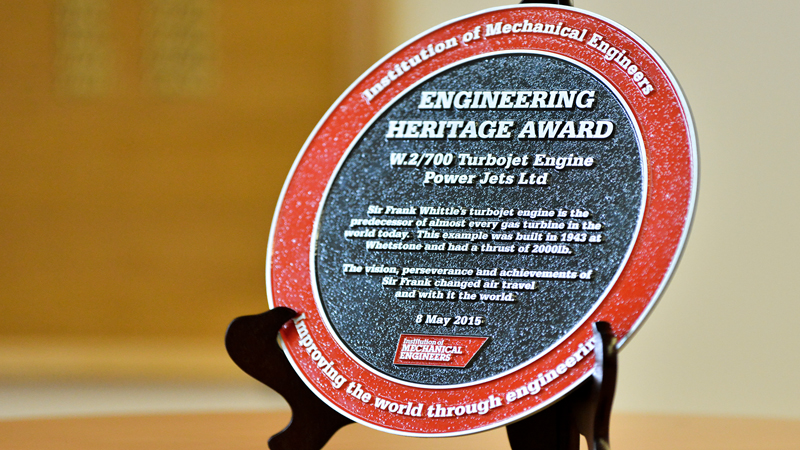 A jet engine created by the inventor of the turbojet engine, Sir Frank Whittle, has been recognised with an Institution of Mechanical Engineers’ Engineering Heritage Award at a special event on Friday 8 May.

When Cranfield College of Aeronautics was formed in 1946, it was gifted a number of aircraft engines and Whittle’s W.2/700 gas turbine engine was one of them. The W.2/700 engine is one of the earliest versions of the jet engine and has been given the award in recognition of being the predecessor to almost every gas turbine in the world today.

It is housed in the Whittle Building at Cranfield University, which was renamed in honour of Sir Frank Whittle, and to mark the University’s contribution in the field of aerospace engineering.

The award was presented by Group Captain Mark Hunt OBE, President of the Institution of Mechanical Engineers to Professor Phil John, Pro-Vice Chancellor of Cranfield University.

Group Captain Mark Hunt OBE, President of the Institution of Mechanical Engineers, said: “This jet engine is the precursor to almost every modern gas turbine. It is no exaggeration to say that Sir Frank Whittle’s invention of the turbojet engine revolutionised air travel, and the world we live in today.

“It is hugely reassuring that the W.2/700 gas turbine engine is so fantastically preserved and displayed by Cranfield University, in a prime location to inspire the Whittles of tomorrow.”

Professor Riti Singh, who initiated the case for the award said: “We are delighted to accept this accolade from the Institution and to join the prestigious list of recipients of an Engineering Heritage Award.  It is appropriate that a University with such a rich heritage in aerospace engineering should be the keeper of the first turbojet engine.”

Mr Ian Whittle, Frank’s son, attended the event and spoke about his father’s early research into gas turbine propulsion and the engineering developments that led to the W.2/700.

From an early age, Sir Frank Whittle demonstrated an aptitude for engineering and flying and was accepted and sent to No. 2 School of Technical Training to join No 1 Squadron of Cranwell Aircraft Apprentices.

His academic and practical abilities as an aircraft apprentice earned him a place on the officer training course at Cranwell. While writing his thesis there he formulated the fundamental concepts that led to the creation of the turbojet engine, taking out a patent on his design in 1930.

This will be the 102nd Engineering Heritage Award to be presented by the Institution of Mechanical Engineers.

About the Institution of Mechanical Engineers

The Institution of Mechanical Engineers was established in 1847 and has some of the world’s greatest engineers in its history books. It is one of the fastest growing professional engineering institutions. Headquartered in London, we have operations around the world and over 111,000 members in more than 140 countries working at the heart of the most important and dynamic industries such as the automotive, rail, aerospace, medical, power and construction industries.