The 2015 Cranfield Female FTSE Board Report launched today, confirms that Britain’s top boardrooms are set to meet the 25% women on boards target this year.

Only 17 more female appointments are needed across the FTSE 100 boards to reach the target set by the Lord Davies review. If the appointment rate of one woman to every two men appointed is sustained over the coming months, the Cranfield authors expect the 25% target to be met before the end of this year.

“The turnover of directorships is key to driving change and will be decisive over the coming months,” explained Professor Susan Vinnicombe CBE, co-author of the report and Director of the Cranfield International Centre for Women Leaders. The percentage of new appointments going to women over the last six months was 31.6%.

Professor Vinnicombe comments: “It has taken many years for the debate on women on boards to be taken seriously, but we are now seeing significant progress. There is no doubt that the Davies Review and the threat of EU-wide quotas has had a major impact on this progress. It is crucial that the momentum that has built up around this issue is maintained, especially with the support of whoever is in power after the General Election.”

Forty-one companies in the FTSE 100 have now reached the 25% target with many of them far exceeding it. Leading the way in joint top place of this year’s ranking, with 45% female representation on their boards, are Diageo and Intercontinental Hotels Group. Recognition must also go to Admiral Group plc with 41.7%, and Capita plc and Kingfisher who both have 40%, which includes two women in executive directorships on their boards.

Dr Ruth Sealy, co-author of the report comments: “This is a critical time for British businesses, not just to meet the 25% target, but also to continue to diversify their boards and organisations beyond the 2015 target.   If we are to achieve sustainable change for the future, employers must focus their efforts on women at every level of their organisation.”

Dr Elena Doldor, co-author of the report, said: “It will be difficult to sustain the pace of change without more ambitious and sustainable measures. Our predictions suggest that as we approach 2020, women’s representation on FTSE 100 boards is likely to stagnate around 28%. There are still not enough women on executive committees or in the executive pipeline. Introducing aspirational and measurable targets for women at all levels is the only way to achieve real progress. Growing the female talent pipeline needs to be high on the agenda for every board, CEO and executive committee.”

In this year’s report the authors took a closer look at which sectors were reaching the target and those who have yet to reach it and concluded that sector is not a significant barrier to the appointment of women directors.

The report also takes a look at how the UK’s progress compares to the rest of the world. Over the past decade the percentage of women on top boards has increased in every country across Europe, varying from 3.7% in Austria to 22.5% in France. The UK registered an increase of 12.6 percentage points and is now fifth in the world.

“It is pleasing to see how far we have come without the need for quotas. But the burning issue remains that not enough women are being appointed to executive director roles in the UK” said Professor Vinnicombe.

Minister for Women and Equalities, Nicky Morgan said: "We have almost doubled women's representation on FTSE 100 boards in four years; we only need 17 more women to be appointed to these boards and we will have met the 25% target we set ourselves. When we started this work in 2011 there were 21 FTSE 100 boards that had no women on them. Now there are no all-male boards left. This is great news.

"But to keep on track we also need to ensure that women are well represented at senior executive level too, making them ready to take up board level positions. In the FTSE 100, the total number of female senior executives has increased from 19.9% to 21% which is to be welcomed, but we need to keep up the pressure to see this increase still further. This is not only good for women, but good for business too. Boards which reflect their customers and clients are better able to understand their needs and respond to them."

Lord Davies of Abersoch said: "The rate of change that we have seen in FTSE 100 companies over the last four years has been remarkable. The voluntary approach is working, boards are getting fixed. We now have to increase the low number of female chairs and executive directors on boards and the loss of talented, senior women from the executive pipeline.

"I have never doubted that Britain has extraordinary talent, or that there are plenty of credible, experienced women, willing and capable of serving on British boards. FTSE companies are now making real efforts to seek out and unleash the full extent of this talent."

Once more the Cranfield report includes a list of ‘100 Women to Watch’. The authors have identified 100 women who are currently on the Executive Committees of FTSE 250 companies or in significant roles of other major institutions, who are ready for a board position and should be considered by search consultancies and nomination committees. The list highlights the many qualified women whose experience comes from sectors other than exclusively or primarily corporate. 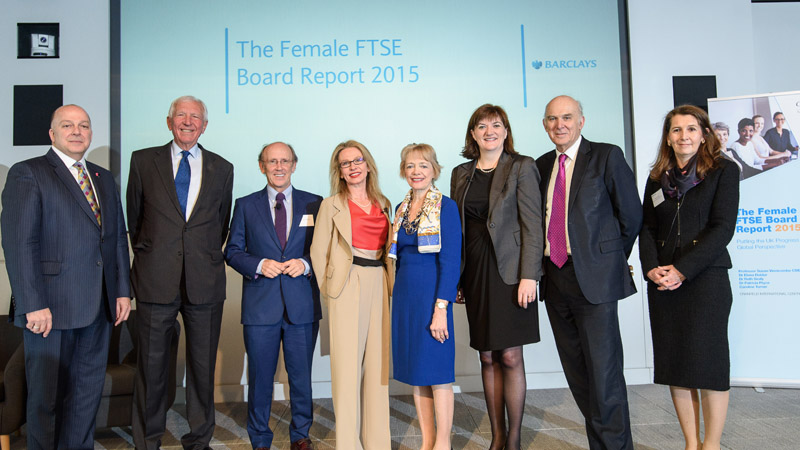 Professor Sue Vinnicombe with the Women on Boards team

The report is sponsored by Barclays, a major global financial services provider engaged in retail banking, credit cards, corporate and investment banking and wealth management with an extensive international presence in Europe, the Americas, Africa and Asia. Barclays’ purpose is to help people achieve their ambitions – in the right way. With over 300 years of history and expertise in banking, Barclays operates in over 50 countries and employs approximately 140,000 people. Barclays moves, lends, invests and protects money for customers and clients worldwide.

Cranfield’s International Centre for Women Leaders is committed to helping organisations to develop the next generation of leaders from the widest possible pool of talent.