Boeing [NYSE: BA] and Cranfield University have signed a collaboration agreement that expands further the relationship between both organisations, allowing more Boeing employees to benefit from Cranfield’s resources.

Boeing has partnered with Cranfield – an education partner focusing on aerospace and business – for over 10 years, working on a variety of research and development projects that capitalise on the University’s expertise in the areas of aviation, aeronautics and aircraft development.

Cranfield University was a critical partner for Boeing on the X-48 programme, where it built the scale-model of the X-48B and X-48C Blended Wing Body aircraft. The aircraft, which was designed by Boeing Research & Technology and flown in partnership with NASA and the US Air Force Research Laboratory, is a scale-model of a heavy-lift, subsonic vehicle that forgoes the conventional tube-and-wing aeroplane design in favour of a triangular tailless aircraft that effectively merges the vehicle’s wing and body.

“Cranfield University is a tremendously innovative research partner and we are pleased to grow our partnership into one that offers world class training for both aerospace engineering students and Boeing employees here in the UK,” said Sir Michael Arthur, president of Boeing UK and Ireland. “Safeguarding the UK’s future as an engineering powerhouse is high on our agenda and investing in local talent is part of that.”

The agreement was signed recently at Boeing Commercial Airplanes’ facility when Sir Peter Gregson, Chief Executive and Vice-Chancellor of Cranfield University attended a tour of the Everett and Renton plants, located outside Seattle, USA.

“We are delighted to have signed this collaboration agreement with Boeing,” said Gregson. “We have been working closely together for more than a decade and this new agreement means that we will continue to develop our long-term and mutually-beneficial relationship. Through this collaboration, Cranfield and Boeing will address some of the greatest challenges facing the aerospace sector worldwide, delivering additional benefits to us both.”

Boeing and Cranfield formalised their relationship in 2008 with the formation of the Integrated Vehicle Health Management Centre, a consortium of industry, academia and government that works together on vehicle health management prognostics and diagnostics. Prognostics is an engineering discipline focused on predicting the time at which a system or component will no longer perform its intended function. Diagnostics is the identification of the nature and cause of the system or component no longer performing its function.

The agreement provides for custom education opportunities, access to Cranfield’s School of Management, and to research opportunities for its student body to potentially work on Boeing projects.

Since 2008, the group of collaborative partners have worked together to deliver health-ready subsystems, which are items like landing gear or environmental control systems that are manufactured with prognostics and diagnostics in mind. Boeing has worked with the centre and its partners on collaborative projects and this new agreement allows Boeing to do work with Cranfield directly, outside the centre related to technology development, training and classes.

“This agreement has opened up our partnership with the university still further and made it a much more efficient process to engage them,” said John Maggiore, Boeing’s liaison with Cranfield University and director of Fleet and Maintenance Solutions, Boeing Commercial Aviation Services.

The agreement will be managed on behalf of the Enterprise by Global Technology, a part of Boeing Research & Technology, which works globally to create a network that values innovation and improves Boeing’s yield of research and development investments. 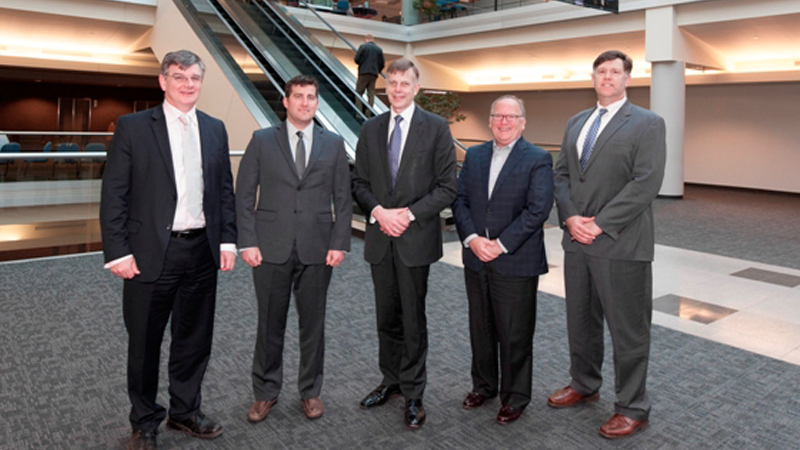 Boeing employs more than 1,800 people across the UK at numerous sites, from Glasgow to Gosport, and the company is experiencing solid organic growth. In 2013 Boeing celebrated 75 years of partnership with the United Kingdom, the Armed Forces, British manufacturing and the air transport industry.  Today the UK remains a critically important market, supplier base and a source of some of the world’s most inventive technology partners.  Boeing’s expenditure with the UK aerospace industry in 2013 was more than £1 billion ($1.6 billion) and the company’s activities worldwide support more than 55,000 UK jobs, in the process enhancing skills, facilitating exports and generating intellectual property.  For more information, visit www.boeing.co.uk

Boeing is the world's leading aerospace company and the largest manufacturer of commercial jetliners and military aircraft combined. Additionally, Boeing designs and manufactures rotorcraft, electronic and defense systems, missiles, satellites, launch vehicles and advanced information and communication systems. As a major service provider to NASA, Boeing is the prime contractor for the International Space Station. The company also provides numerous military and commercial airline support services. Boeing provides products and support services to customers in 150 countries and is one of the largest U.S. exporters in terms of sales. Headquartered in Chicago, Boeing employs more than 168,000 people across the United States and in more than 65 countries. Total company revenues for 2014 were $90.76 billion.