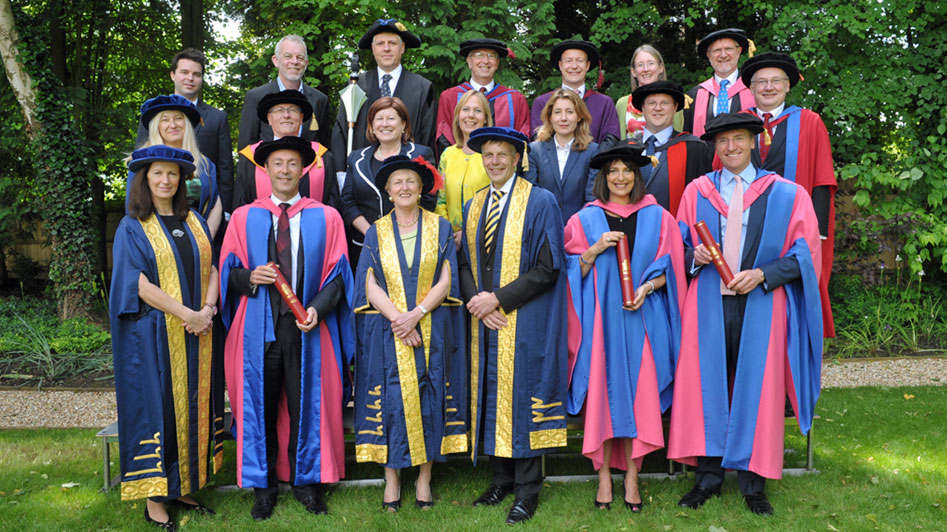 At this year’s graduation ceremonies Cranfield University has awarded honorary degrees to distinguished leaders. The exclusively postgraduate university bestows the honors in recognition of an individual’s major influence in the subject in which the University specialises.

Commander of Joint Forces Command, Ministry of Defence General Richard Barrons was commissioned into the Royal Regiment of Artillery in 1977. He was appointed MBE in 1993, OBE in 1999, CBE in 2003, and was awarded the Queen’s Commendation for Valuable Service in 2004 and 2006. He is an Aide-de-Camp (ADC) to Her Majesty, The Queen and was appointed Knight Commander (Most Honourable Military Order of the Bath) in 2013.

He has served extensively in Northern Ireland, Bosnia, Kosovo, and in UN, UK and NATO appointments. As Major General he was Deputy Commanding General of Multinational Corps Iraq (Baghdad, 2008) leading on operations with the Iraqi Armed Forces. He was appointed Chief of Staff of the Allied Rapid Reaction Corps in April 2009 and then Director Force Reintegration in HQ ISAF, assisting the Afghan Government’s efforts on Taliban reintegration and political reconciliation.

He was Assistant Chief of the General Staff (2010) covering the Strategic Defence and Security Review and Defence Reform exercises before becoming Lieutenant General in 2011 and taking post as Deputy Chief of the Defence Staff (Military Strategy & Operations) - the director of operations for UK armed forces. He assumed command of Joint Forces Command on his promotion to General in 2013.

Fabrice Brégier was appointed President and Chief Executive Officer of Airbus in June 2012, following his role as Airbus Chief Operating Officer which he held since October 2006. As a Member of the EADS Executive Committee, he was commissioned by Louis Gallois to improve the overall operational performance of the Group. His responsibilities included the company’s wide-ranging restructuring and change programme, the Executive Committee functions, Engineering and Procurement, and the A350 XWB programme.

He started his career in 1983 as a test engineer at the Creys-Malville nuclear power station, becoming sales manager for Péchiney (Japan) in 1984. In 1986 he joined the DRIRE Alsace (Ministry of Industry) and was then appointed Director of Economic and Financial Affairs with the Ministry of Agriculture in 1989. He joined Matra Défense in 1993 and, in 1996 he was appointed Director of Stand-Off activities (Apache, Scalp EG/Storm Shadow) in what had become Matra BAe Dynamics.

He went on to become CEO in 1998. He was appointed CEO of MBDA, the leading European missile systems company that was created in 2001 by Aerospatiale Matra, British Aerospace and Finmeccanica. In 2003, he became President and CEO of the Eurocopter Group.

Charlie Mayfield became the Partnership’s fifth Chairman in March 2007. He joined the Partnership in 2000 as Head of Business Development, responsible for business strategy and development for both John Lewis and Waitrose.

Charlie joined the Board as Development Director in 2001 and was responsible for developing the Partnership’s online strategy. He became Managing Director of John Lewis in January 2005 prior to taking up his appointment as Chairman of the Partnership in March 2007.

Charlie began his career as an officer in the army. He joined SmithKline Beecham in 1992 and became Marketing Manager for the Lucozade brand, before moving to McKinsey & Co in 1996, where he worked with consumer and retail organisations.

Charlie is the Government appointed Chair of the UK Commission for Employment and Skills, President of the Employee Ownership Association and a Director of Central Surrey Health Trustee Limited. He received a knighthood in June 2013 for services to business.

Carolyn McCall joined easyJet in 2010 as Chief Executive Officer. She has introduced customer innovations like allocated seating and she has seen a series of milestone events including reaching the landmark of carrying 60 million passengers annually as well as 12 million business travellers a year while ensuring easyJet provides easy and affordable travel for all.

Under Carolyn’s leadership, easyJet has exceeded financial expectations and in 2013 the company entered the FTSE 100. She was awarded the Airline Business Airline Strategy Award for Low Cost leadership.

Prior to joining easyJet, Carolyn was Chief Executive of Guardian Media Group plc. She was also was non-executive director of Lloyds TSB (from 2008–2009) and was a non-executive director of Tesco plc (2005-2008), and of New Look plc (1999-2005). She was Chair of Opportunity Now (2005-2009) and a former President of Women in Advertising and Communications London (WACL). Carolyn has been a member of the Royal Academy Corporate Board for the last three years. She was awarded the OBE for services to women in business in the Queen’s Birthday Honours List in June 2008. In April 2008 she was named Veuve Clicquot Business Woman of the Year. In January 2014, Prime Minister David Cameron appointed Carolyn to be a UK Business Ambassador.

Christine Tacon is the first Groceries Code Adjudicator, appointed in 2013 by the UK Government to oversee the implementation of the Groceries Supply Code of Practice. This regulator role was created by an Act of Parliament following Competition Commission inquiries into retailers passing excessive risk down the supply chain. She is responsible for monitoring and enforcing the Code which governs the relationship between retailers with an annual UK groceries turnover of more than £1 billion and their direct suppliers and covers such issues as dealing with suppliers fairly, paying them on time and what payments can and cannot be required. The role has global reach as it covers overseas suppliers and with the UK taking the lead in this field, many other countries, including the EU, are watching the progress of her work in order to introduce similar action.

She is also a Non-Executive Director of the Met Office, a Public Member of Network Rail, a Non-Executive Director of Anglia Farmers, a Council member of the Natural Environment Research Council and a Governor of Harper Adams University. Christine studied engineering at Cambridge University and holds an MBA from Cranfield University. Her career was mostly in marketing (Mars, Anchor, Vodafone) before she joined the Co-operative Group to run their farming business, the largest in the UK, which she did for 11 years. She was awarded a CBE for services to agriculture in 2004.

Since 2006 Peter has held various ministerial advisory roles to the UK Government. He is a member of the Green Economy Council, the Ecosystems Markets Task Force, and Defra’s Strategic Regulatory Scrutiny Panel. He has also given evidence at Government committees and advised overseas governments, including the Federal and State Governments in Australia on skills, finance and energy efficiency, and the European Environment Agency. In 2012 he was identified as one of the ‘Top 100 Global Sustain Ability Leaders’ by ABC Carbon Express and Sustainability Asia.

Peter became manager of the Harwell Waste Research Unit in 1983, in which year he was awarded the American Society of Testing and Materials Special Technical Publication Award for work characterising landfill gas. He set up the first environmental consultancy office in Scotland in 1985 for Aspinwall and was involved in its acquisition by Enviros in 1997. He became Strategic Advisor in 2013 when the company was acquired by Jacobs.

He carries out a number of voluntary roles promoting the economic benefits of high quality environmental policies in businesses; most notably as Chairman of the Aldersgate Group since December 2007. He chairs Cranfield’s Environment Industrial Advisory Panel and is a Trustee of The Wildlife Trusts.

The 2014 honorary graduates were joined by 2,400 Cranfield graduates from more than 100 countries, who also received their degrees this year and celebrated their excellent achievements with more than 400 guests.

This higher research degree is associated with our Environment Doctoral Training Centre (DTC). The Environment DTC provides a focal point for engagement and academic discussion for all students involved in environmentally-related research at Cranfield. It aims to encourage an effective and vibrant research culture, founded upon the diversity of activities and knowledge relating to the sector which characterise our research portfolio.