The large cabin evacuation simulator was commissioned and funded by the UK Civil Aviation Authority, at a cost of £0.5m and was officially opened by HRH The Duke of Kent in July 2001. Both of these simulators were developed to support research into passenger safety issues associated with very large transport aircraft. Previous research has examined the effectiveness of cabin crew procedures and behaviour in emergencies, passenger evacuation rates under various scenarios and conditions, and passenger attention to safety information.

Our clients have used the facilities at Cranfield University for investigating the following:

The facility was funded by the UK Civil Aviation Authority and has also been used on projects involving the European Joint Aviation Authorities, Transport Canada, Boeing, Airbus and British Airways. Several large programmes of research have been undertaken for a consortium of European operators, manufacturers and regulators.

Research trials in both simulators are filmed using a range of video recording equipment, and cameras are located as required. Video footage can be taken in conditions of darkness using infra-red lighting and IR sensitive cameras. Thermal imaging cameras can be used to obtain footage where non-toxic theatrical smoke has been introduced into the cabin(s). A video editing suite is also available, with time-coding equipment, to analyse research footage.

Items such as cabin crew uniforms, galley trolleys, oxygen masks, seatbelts and lifejackets are also available, and over 5,000 people have taken part in our evacuations research trials.

Large cabin evacuation simulator: Airbus A380
The construction of the cabin is modular and fully flexible and is the only passenger research facility in the world able to seat up to 300 passengers, over two decks. It can be configured to any type of aircraft with any specified interior, e.g. stairs, no stairs, lighting, smoke, and the walls, seats, aisles, exits and the internal staircase can all be relocated and reconfigured according to research requirements. The sill of the lower deck is 5 metres above ground level, and the upper deck is 8 metres above ground level. The upper deck is currently fitted with an escape/evacuation slide, which is 19 metres long. Cabin lighting, emergency lighting, sound recordings, the PA system and the introduction of non-toxic theatrical smoke can all be controlled from a number of observation stations within the facility.

Narrow body cabin evacuation simulator: Boeing 737
The Boeing 737 cabin simulator can seat up to 60 passengers, and the seating arrangements can be changed to various configurations. Cabin lighting, emergency lighting, sound recordings, the PA system, the passenger seat belt/no-smoking signs and the introduction of non-toxic theatrical smoke can all be controlled via a computer workstation. It has two fully functional Type I exits, a fully functional Type III exit, and a service door. The bulkheads can be reconfigured to give the desired passageway width to the Type I exits, and one of the Type I exits is also fitted with an escape/evacuation slide, which is 3 metres above floor level. 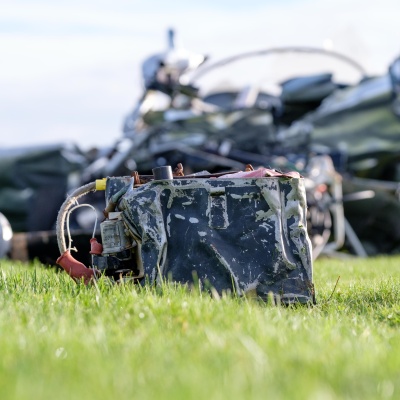