From rifles equipped with the latest thermal imaging and laser sights, to 19th Century Victorian machine guns, delegates at Cranfield’s most recent Symposia got the chance to try out cutting-edge close combat weaponry and learn about historical weapons of war all in the same day.

Michael Hewetson OBE, Director, Symposia at Shrivenham, said: “This annual event was given considerable support again by the Head of Combat and his staff at the Combat Capability Directorate at Army Headquarters. The feedback we have received indicates a most successful, useful and enjoyable event.

“The range day was made possible by the experts of the Infantry Trials and Development Unit and the team at COTEC, making the event, as a whole, unique in the UK.”

The event brought together serving military staff, industry experts and academics, with the aim of fusing together the vision and capability requirements of Government departments with the vision and technological expertise of scientists and industry.

Major Edward Hunter SO2 Soldier Systems and alumnus of Cranfield’s Battlespace Technology MSc, said: “The Close Combat Symposium is very useful for me in helping inform UK Soldier System capability development. Not only does it facilitate exchange of ideas between UK military components, but it also draws academia, industry and the specialist media into the discussion with the diverse breadth of experience, expertise and opinion they bring with them.”

“Capability development is based on compromise between performance trade-offs, cost and speed of delivery, therefore wide consultation and discussion can only help defence make balanced and informed decisions.”

The live firing session was the middle part of a three-day symposium and saw industry experts – with the assistance of military personnel – demonstrating their weapons to around 200 delegates, who were also able to fire and test the pistols, rifles, sights and suppressors/silencers being shown.

Richard Beatson, Sales Director, Pearson Engineering Ltd, also attended as a delegate and said: “The insertion of a range day into the Close Combat Symposium makes it into an excellent event. The day was well-organised and the sponsors and exhibitors who helped bring it together are to be congratulated. It skillfully allows all present, whether experts or not, to understand many of the issues and opportunities involved in close combat.”

David Lever, UK Sales and Marketing Manager for Excelitas Qioptiq, a manufacturer and designer of weapons sights, said: “We are delighted to support the Close Combat Symposium. The mix of exhibition, conference briefings and live fire demonstrations gives us a valuable opportunity to meet with users, buyers and requirement setters and allows people to get hands-on experience with our equipment.

“The event continues to draw delegates from the UK and overseas – both military and industry – and creates a great opportunity for networking, open discussion and relationship building.”

Historical weapons from a private collector were also on display and two of the 'Big 5' Victorian machine guns were demonstrated with blank rounds. Some delegates also took the opportunity to try turning the cranks to fire the weapons manually themselves.

The Hotchkiss Revolving Cannon, one of only two in the UK, hadn't been fired in Europe for over 100 years, and one of only four British surviving Gatling guns – used during the late 19th Century in conflicts such as the Zulu War (1879) and Sudan Campaign (1881–1899) – was also demonstrated.

The innovative revolving design of the guns helped to overcome problems with the firing of sustained bursts and overheating barrels, a principle that is still used today in weapons such as the Phalanx CIWS and the A-10 Thunderbolt aircraft.

Information about the latest types of ear protection equipment and technology was also available to delegates.

The first and last days of the Symposium were based at Shrivenham with presentations from UK and overseas military officers, civil servants, industry, academics, and journalists from leading defence publications.

Attendees were also invited to a dinner at STEAM, the Museum of the Great Western Railway, on the site of the old railway works in Swindon after the range day and enjoyed exclusive access to the museum for the evening.

Symposia provide a forum for the exploration and exchange of experience, ideas and knowledge of technology, management and leadership together with the relevant aspects of security and resilience. 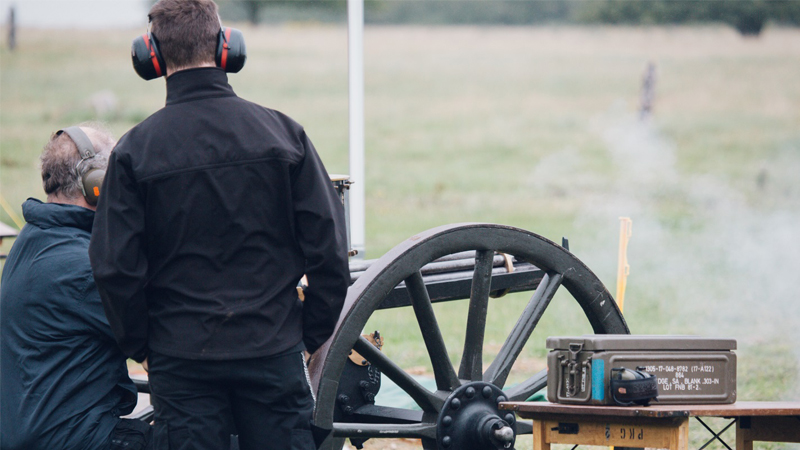