The Arms of the University 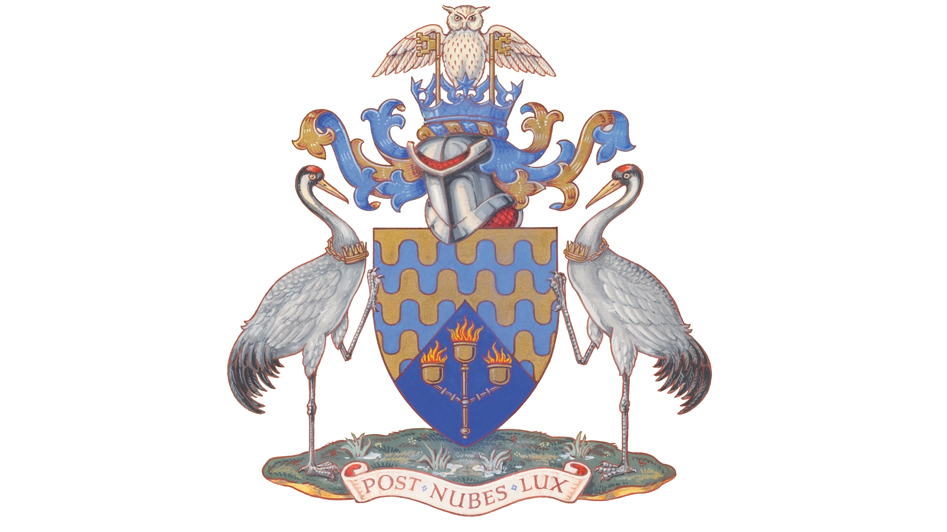 The Arms of the University are reserved for Graduation Day and are used on official documents, such as graduation certificates and prize winner trophies and displays. They symbolise Cranfield’s history and formal heritage. The crest was last revised for the 50th anniversary of the University.

The explanation of the symbolism of the Arms below was kindly prepared by Sir Colin Cole, the sometime Garter Principal King of Arms:

The ‘bars undy wavy’ in chief of the shield are intended in combination with the cranes to allude to the University's name, Cranfield, which etymologically derives from ‘cranuc-feld’, meaning a field frequented by Cranes. The three-branched torch in the base refers to learning and knowledge in the sciences of Engineering, Technology and Management.

In the crest, the astral crown alludes to the College of Aeronautics and also commemorates The Lord Kings Norton as Chancellor, having regard to his contribution to the development of aeronautical research and his links with the College. The keys are intended to signify the gaining of knowledge by study and instruction and the owl, with its wings expanded, may also be taken to represent knowledge in the widest sense.

In the badge, the significance of the keys has already been alluded to and the crown rayonny refers both to the Royal Charter under which Cranfield came into being and, by the finials being composed of the rays of the sun, to energy and its application through engineering and technological skills to industry, commerce and public life.

The chain which surrounds the badge shows the link between the various disciplines to be studied at the University and in itself also refers to engineering where it plays so many parts.

Finally, the ‘compartment’ upon which the cranes stand represents the area of riverside where cranes are likely to be found, this being of course in reference also to the name ‘Cranfield’.