An exhibit marking the role of horses in World War One produced by designers from Cranfield University has gone on display at an Army museum in Aldershot from 21 August. The exhibit, titled ‘Green fields to battlefields: The welfare of the horses who served in WW1’, will be on display at The Museum of Military Medicine until 8 December.

It is the first time the Learning Services department at Cranfield Defence and Security have taken research by a student and had it displayed by a museum.

Jason Semmens, Director, The Museum of Military Medicine, said: “Although it was the first war to use machinery on an industrial scale, horses, dogs, mules and even camels were used during the First World War to haul equipment and provide transportation, just as they had in previous conflicts.

“The care of animals fell to the Royal Army Veterinary Corps, and The Museum of Military Medicine is delighted to showcase the role of the horse during the centenary of the conflict and of the Corps in looking after the War Horse.”

Created by Cranfield University to mark the 100th anniversary of the Great War (1914–1918), the exhibit was inspired by Forensic Archaeology Master’s student Rebecca Plumley’s research project on the welfare of WW1 war horses, supervised by Peter Masters, Research Fellow.

It documents why and from where the horses who served in the war were recruited and how their welfare and medical treatment was managed throughout their time in service.

Clare Pratchett, Art Director, Learning Services at Cranfield Defence and Security, said: “Green fields to battlefields aims to be both informative and reflective: in addition to telling the facts we wanted to remind people of the sacrifices these animals made for us, and that we should remember them together with the men they served alongside.”

The exhibit features a number of silhouetted horses covered in a series of aerial photographs from the western front, with each silhouette portraying a different aspect of the treatment and care given by the Army Veterinary Corps.

Various breeds, selected for specific attributes of value to the war effort, are represented and the horses are set amongst vertical columns reminiscent of the stark battlefield landscapes they fought and served in.

“The subtle textures of the aerial photographs reflect the scars of war born by these animals,” added Clare.

Rebecca said: “My project looked at our equine heroes and how they helped us win the war. Clare and I worked together to select extracts of my thesis to base the installation on and she came up with the idea of the design.

“I am delighted that the exhibit is going to the Army museum where it will be appreciated by a new audience and help inform people of the sacrifices made by our horses that weren't given the choice of whether or not they wanted to go to war. I'm also delighted that it provides an opportunity to showcase my work and that of Cranfield University.”

As part of her research, Rebecca took part in the Digging War Horse Project ‒ a Heritage Lottery Fund Community Outreach Project ‒ that collaborated with Operation Nightingale in its work to enable wounded or traumatised veterans and service personnel to take part in archaeological excavations.

Rebecca worked with the project at Larkhill Garrison on Salisbury Plain, Wiltshire, to look for the location of a horse hospital on the site and also conducted archaeological research at Catterick Garrison in North Yorkshire.

The war horse exhibit was previously unveiled at the University’s annual Defence and Security Doctoral Symposium. 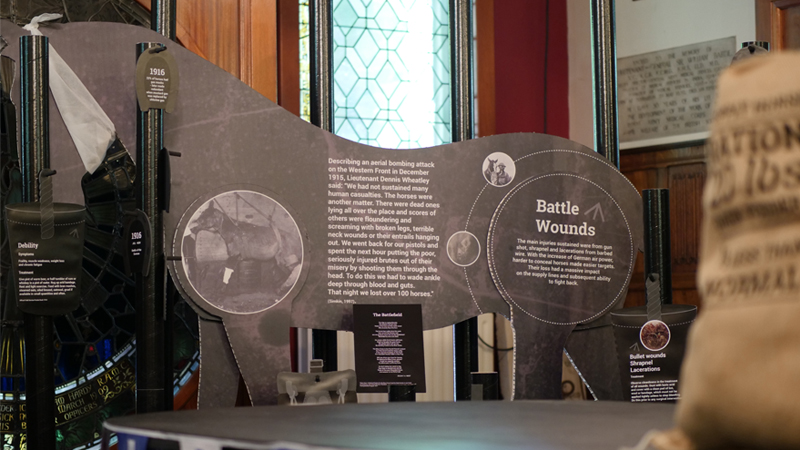