"Working in the New Digital World – What Does It Mean?”

We are all now faced with what is being badged the 4th Industrial revolution – Digitalisation forms the basis of how this can be achieved.  This raises the question ‘Aren’t we digital already?’  The answer is yes and no – we are on a journey from Paper to data to knowledge.  The journey is not over and needs development of the technology enablers and the integration of those enablers to move to a digital economy linking the full product lifecycle.  Integration within Engineering and between Engineering, Manufacturing, Customer Services, Sales and Marketing and crucially the Extended Enterprise; to be able to share knowledge and experience to improve manufacturing businesses will need investment in research and development of new technologies. In this keynote speech, some of the challenges faced by Airbus will be presented – some of which I believe will be shared!

A commercial aircraft manufacturer, with Space and Defence as well as Helicopters Divisions, Airbus is the largest aeronautics and space company in Europe and a worldwide leader. Airbus has built on its strong European heritage to become truly international – with roughly 180 locations and 12,000 direct suppliers globally. The company has aircraft and helicopter final assembly lines across Asia, Europe and the Americas, and has achieved a more than six-fold order book increase since 2000.

Chris is based at the Filton site near the city of Bristol UK.

“Role of Category theory in Design and Manufacturing”

Category theory (CT), a branch of mathematics which studies abstract processes and their behavior under composition, is a promising new area of study in the foundations of design and production. CT provides a formal toolbox to specify and analyze complex structures recursively in terms of simpler components, and far-ranging recent applications include geometric modeling, materials science, Petri nets, economic game theory and many others. Even so, we believe that this area is under-explored, offering a powerful and precise mathematical foundation to support the natural behavior of engineers as they create and apply new domain- and scope-specific languages and analyses. Furthermore, CT is inherently meta-mathematical, it applies to itself, and this offers the possibility of building up holistic models for complex systems through the formal integration of local domain-specific models.

In this talk we will focus on some example applications of CT in process modeling, the integration of manufacturing supply databases, and semantic interoperability.  Starting from these examples, we will explore the potential scope for the use of category theory in systems engineering more generally. We close by setting out an ambitious research agenda for the community to explore the use of CT in design and production, as well as some obstacles to realizing these goals.

Dr. Eswaran Subrahmanian is a Research Professor at the ICES and EPP at Carnegie Mellon University. He was the Chief Scientist at the Center for Study of Science, Technology and Policy (India, 2008- 2011).  He has held visiting professorships at the Faculty of Technology and Policy Management at TU-Delft (Netherlands), the University of Lyon II; and the National Institute of Standards and Technology. His research is in the areas of Socio-technical systems design, Decision support systems, Engineering informatics, Design theory and methods, and engineering design education. He has worked on designing design processes and collaborative work support systems with Westinghouse, ABB, Alcoa, Bombardier, Boeing, and Robert Bosch. He is a founding member of a Bangalore-based non-profit research group, Fields of View that uses simulation and gaming for inclusive design of urban issues. He was awarded the Steven Fenves Award for contributions to Systems Engineering at CMU. He is a Distinguished Scientist of the ACM and was elected a Fellow of the American Association of Advancement of Science in 2008. In 2013, he was a Visiting Fellow of Scottish Computer Society. He was a 2016 Distinguished Visiting Fellow of the UK Royal Academy of Engineering at University of Bristol, UK.

"Power for Air, Land and Sea"

Development of technology is an exciting feature of industry, but if it can’t be applied into useful products or services, then it is ultimately expensive and futile. Application of technology needs to be facilitated through managing complex systems, designing to suit a large range of important variables and quickly converting new Manufacturing and Digital technologies into production-ready capability.

At Rolls-Royce plc, robust and timely application of technology is the lifeblood of new product introduction and customer service offerings for Land, Air and Sea. We will discuss how this is done by showcasing some compelling examples.

Mark Halliwell is the Chief Audit Engineer for the Marine and Nuclear global Businesses, at Rolls-Royce plc. Mark graduated in Engineering with First Class Honours from the University of Durham, and his early career in Rolls-Royce was spent in Combustion and Turbines Engineering, during which time he became a Chartered Engineer. He held the roles of Engineering Manager and then Chief of Process Capability & Improvement within Turbines Engineering, working on several Rolls-Royce Trent, RB211, BR700 and Marine programmes.

In 2006, Mark took the lead on behalf of Engineering in a global team to re-structure Rolls-Royce's Supply Chain Organisation, and was subsequently elected as a Fellow of the Institute of Mechanical Engineers. Mark went on to become Head of Business Development & Improvement in Rolls-Royce's Engineering Systems & Services organisation, leading the formation and integration of this global group of around 1000 employees. Since 2014, Mark led in the role of Programme Executive - Engineering Resourcing Strategy for Aerospace, prior to moving in 2016 to be Chief Audit Engineer - Marine and Nuclear.

Mark is a mentor to several young Engineers, Visiting Fellow to the University of Cranfield and author of several patents. He is married to Veronica, and their two children Hannah and Chris are both studying at University. He is Captain of the Rolls-Royce Design Office Cricket Club, supports Derby County Football Club, and enjoys hiking, either on long-distance or mountain treks with his University friends, or sometimes accompanied by his enthusiastic dog, Pablo! 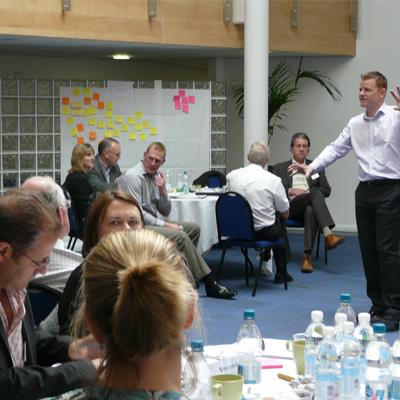